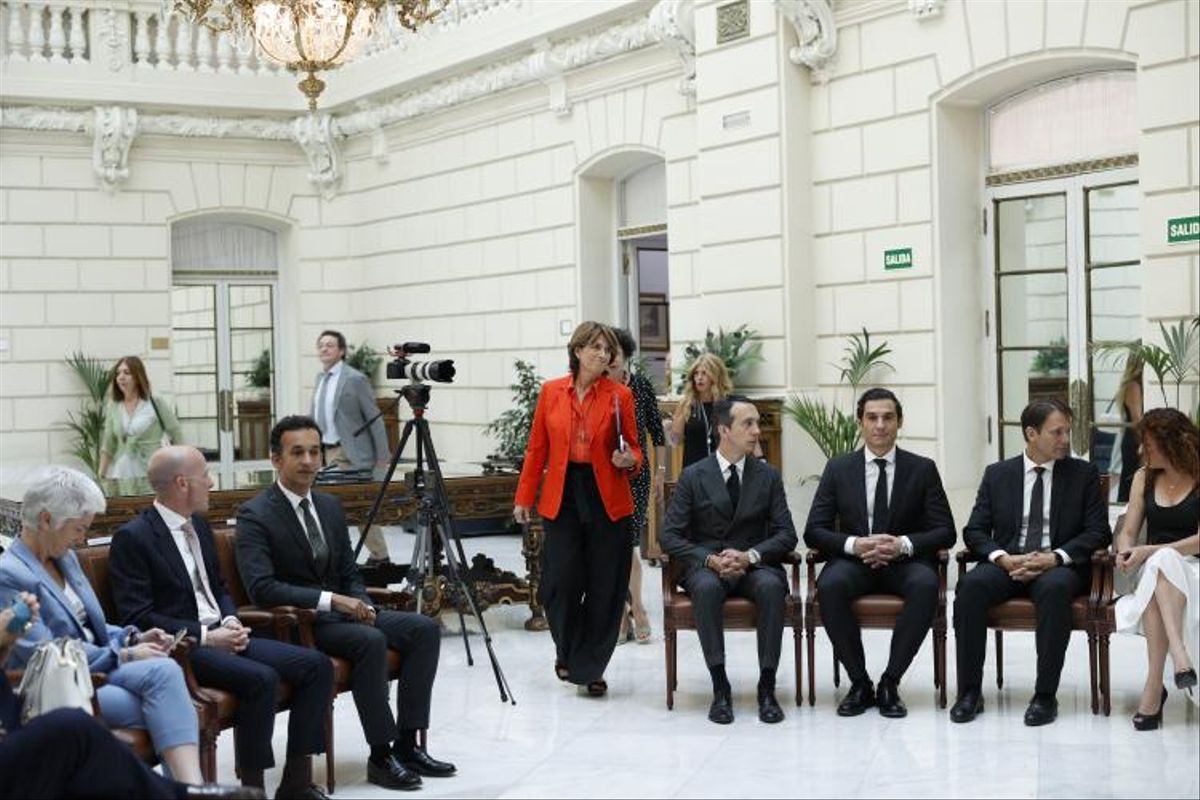 Table Of Contents hide
1. Reports about the new draft law
2. Like this:


The State Attorney General, Dolores Delgado, already quite recovered from the emergency operation on the spine to which she had to undergo last April, she officially returned this Wednesday from her sick leave to preside over the constitution of the new Fiscal Council, which is now made up of mostly conservative sensitivity vocals after the triumph of Association of Prosecutors (AF) in the elections held within this group.

It has been a procedural session, in which Delgado has presided over the act of swearing in or promising and taking the new members and has fired those who have made up this advisory body for the last five years.

As it is an organ with born members and others that are result of a choice by the prosecutors themselvesUnrelated to any parliamentary appointment, the Fiscal Council has not suffered any type of delay to be renewed, as is the case with that of the Judicial Power (CGPJ)blocked for more than three and a half years.

The Progressive Union of Prosecutors (UPF)For its part, it lost half, remaining in two —Santiago Mena, Superior Prosecutor of Castilla y León; Y Yolanda Ortiz, Delegate for the environment in the Seville Public Prosecutor’s Office–. The Professional and Independent Association of Prosecutors (APIF) achieved for the first time a seat in this body, which is for its spokesman, the prosecutor of the Supreme Court Salvador Viada. Added to them are the ex officio members of the Fiscal Council: the deputy prosecutor of the Supreme Court, Ángeles Sánchez-Conde, and the chief inspector prosecutor.

Reports about the new draft law

Both the CGPJ and the Fiscal Council have among their functions the advisory ones, to report on Bills, and in this sense during the session this Wednesday a total of nine have been distributed to those who will be their rapporteurs, according to fiscal sources.

These reports affect proposals of interest such as the so-called Law ‘trans’, international adoption regulations or the Bill that regulates the protection of informants against corruption (‘Complaint’) as a result of the transposition of a community directive. This Council will also have to report on the recently presented reform of the abortion law.

During the act, the attorney general gave a speech in which she reviewed her management at the head of the Public Ministry, to which she added what she considers her successes during her previous stage as minister of Justice in relation to prosecutors and their needs. “There is more, many more projects that will see the light in the coming months“, he assured them.

Among his advances, he recalled the report on the draft of the new Law of Criminal Procedure (LECrim), very critical of the former minister’s proposal Juan Carlos Field, and of the one who has said that he contributed “without a doubt” to the new minister Pilar LLop constituting the inter-institutional working group that is now reviewing it.

Among the issues on which progress has been made, Delgado has also cited the expansion of the workforce, the improvement in the remuneration of prosecutors and improvements in the call for oppositions, training, conciliation rights, contests, substitutions, occupational hazards, material means and technological tools.

From the majority Association of Prosecutors, which obtained the majority support of the race, has stated through a statement that its six “will defend the rights of prosecutors and they will work for a Career based on the values ​​of neutrality, transparency and legality”. For his part, Viada has seen his attempt frustrated in this session so that certain requests could already be included on the agenda that he will influence in following Councils, related to substitutions, workloads and transfer competitions.

Elections 2022: parties will sign the Electoral Ethical Pact on August 17

Alejandro Muñante rules out having won vice-presidency for Peru Libre: “The left split”

Pedro Castillo regrets the death of soldiers in the Vraem: “Their deaths will not go unpunished”