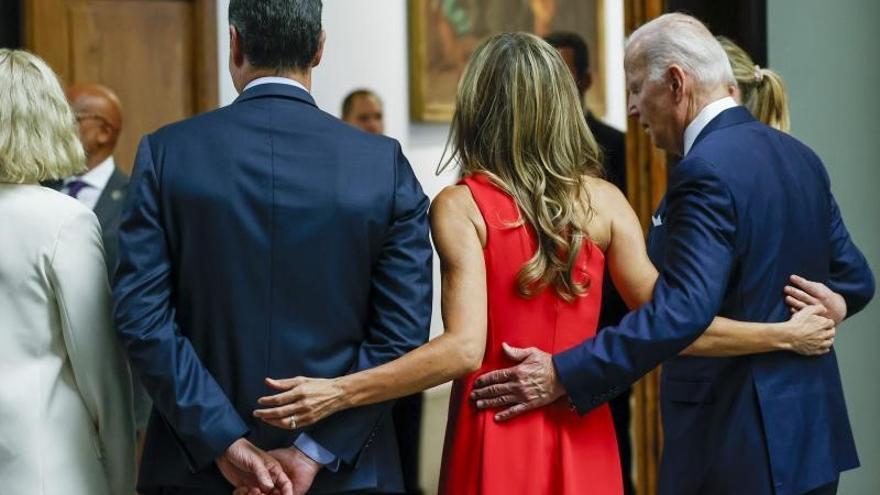 Table Of Contents hide
1. From the ministry it is explained that the “political decision“, but it is necessary that the USA give a definitive calendar
2. The Government hopes to be able to reach the threshold of 2% of GDP on military spending, pledged at the Wales summit, “between 2028 and 2030“
2.1. For the full broom on July 14?
2.2. The PP says that “it will not fail”
2.3. Like this:


The Ministry of Defense cools the arrival of two new destroyer ships at the naval base of Rota (Cadiz)that the US president, Joe Bidenhas asked Spain to accept. They are not expected to be shipped in the remainder of the year. The Government assures that the Americans still have to finalize their calendar and probably “take more than six months“. At the moment, they explain, what has been adopted is the “political decision”, displayed this Tuesday in the meeting that the chief executive, Pedro Sánchez, held with Biden in Moncloa, and embodied in a joint declaration. But now, they add, the Americans have to make a concrete proposal.

This calendar, much more diffuse than it seemed at first, postpone open debate between the partners of the coalition Executive, PSOE and United We Can, who disagree on this matter. The purple formation maintains its antimilitarist culture unchanged and opposes NATOthe increase in defense spending and the strengthening of military collaboration with the US, despite the profound changes in the international order that the Russian invasion of Ukraine has brought about.

The US will reinforce its military presence in Spain and in five other European countries (Poland, Romania, Italy, the United Kingdom and Germany), as well as in the Baltic region

the rise of four to six warships and all the additional personnel that it entails (about 600 soldiers), supposes a modification of the 1988 Defense Cooperation Agreement between Spain and the US. His change must first be approved by the Council of Ministers and ratified later by the Cortes Generales.

In the meeting in Moncloa and the subsequent appearance, Biden conveyed his desire that the Rota’s capacity increase is executed “better sooner than later”. Hours later, at the beginning of the NATO summit, Washington issued a statement in which it specified that in addition to Spain, it will reinforce its military presence in five other European countries —Poland, Romania, Italy, the United Kingdom and Germany—. It will also increase the “rotary deployments” in the Baltic area.

The Prado Museum hosts the Euro-Atlantic Dinner with the leaders of NATO and the EU https://t.co/dLD3oMQrcD pic.twitter.com/9j4k2BS4N5

For the full broom on July 14?

This entire plan, which is due both to Biden’s desire to correct the withdrawal in Europe carried out by his predecessor, Donald Trump, and to the decision to respond to the Russian invasion of Ukraine, conditions the final calendar for Spain. According to ministry sources, it is necessary to carry out works at the Rota naval base to house these new ships, an expense that the Americans, they say, have already budgeted for. That is why they insist that until the US does not specify when they will send the two destroyers, it is not possible to launch the legislative procedure to change the current agreement.

The question is when the approval of the amendment to the 1988 agreement will pass by the Council of Ministers, so that it can then be ratified by Congress and the Senate.

The question now is, therefore, when the increase in Rota’s military capacity will go through the Council of Ministers, precisely because it is not peaceful within the coalition, since United We Can oppose the number of destroyers growing by 50%. In Defense they emphasize that in theory there would be no rush, because in any case the ships will take time to arrive in Spain. If the purple ones, in the meeting of the Council, vote against or abstain, “would open a major crisis“In the Cabinet, they warn from the socialist leadership.

Moncloa sources indicated this Wednesday to this newspaper that they were awaiting a conversation with the Foreign and Defense ministers, Jose Manuel Albares Y Margaret Oaksto finish adjusting the gear of the procedure. And from the Socialist Group they hoped that the Council of Ministers would proceed to approve the amendment to the 1988 Defense Agreement as soon as possible, so that the validation could be included in the full broom of the Congress of July 14 (the one that will follow the debate on the state of the nation), so that the Senate would also endorse it before the summer break. But, according to Defense, this is up in the air because everything depends on Washington’s timing.

What does urge the Executive more is the ratification of the accession of Sweden and Finland as members of NATO. After Turkey lifts its veto, both countries will be formally considered invited countries as of next july 5. Sánchez has always defended that he wants Spain to give the go-ahead for her entry as soon as possible.

#Straight | Soltenberg specifies that “the majority” of the 300,000 troops with which NATO is going to increase its rapid response forces will be those that each country has on its territory, which will now be organized to participate in Alliance operations pic.twitter.com/mwwGBWjJuT

The PP says that “it will not fail”

Precisely the president used the example of Stockholm and Helsinki to call United We Can to “reflection”because if two historically neutral countries have applied to join the Alliance it is because they feel the threat of Russia very close. So NATO needs to increase its “deterrence“. “Neither Europe nor NATO are an organization made of expansionist or imperialist whims like the Russia of [Vladímir] Putin”, told them. The Government, however, is guaranteed to go ahead with the ratification of the amendment to the 1988 agreement with the support of PP and Citizens. The popular have already warned, without publicly revealing their vote, that “they will not fail” in everything that involves strengthening the bilateral relationship with the US.

Defense spending in Spain is 1.01% of GDP, only one step above Luxembourg, starting from the bottom

Russia’s invasion of Ukraine is changing the world order. Not only has it removed from its neutrality Sweden Y Finlandit has also moved Germany to multiply its military spending. And it has pushed the allies to also increase their defense budget. Sánchez already promised that he would do it, despite the opposition of United We Can. Sources from the ministry that Robles pilots pointed out that his forecast is that “between 2028 and 2030” Spain reaches an investment equivalent to 2% of GDP, a threshold that NATO members undertook to reach, with a ten-year horizon, at the 2014 Wales summit. Right now, according to figures from the organization itself , military spending in our country (estimated for 2022) stands at 1.01% of GDP, trailing just one step above Luxembourg (0.58%).

#Straight | Stoltenberg stresses that NATO has aimed “for decades” to improve its relationship with Russia and accuses the country of having “moved away” from this “attempt to increase trust” with the Alliance pic.twitter.com/FhywLjPHOO

The Executive had already anticipated that it was impossible to double the Defense budget by 2024, which it is currently close to 10,000 million eurosbecause the ministry would not have the capacity to absorb it, but it would speed up the increase in the annual allocation. Now, therefore, outlines the forecast, setting as a temporary goal “between 2028 and 2030”. During the work session this Wednesday at the Madrid summit, “several countries“they promised to increase their Defense budget, until reaching 2.5% or being above it.