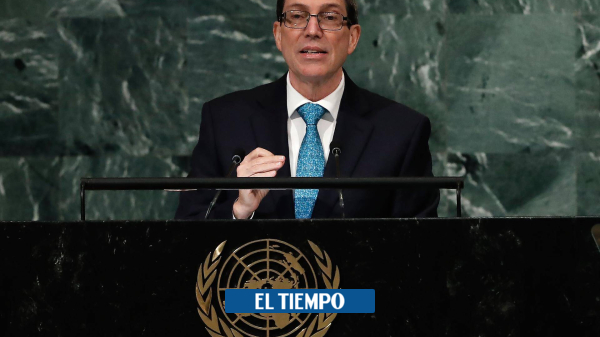 Cuban Foreign Minister Bruno Rodriguez on Wednesday thanked Colombian congressmen who asked the US to remove the island from the list of state sponsors of terrorism.

“Deepest thanks to the more than 80 Colombian congressmen for this initiative,” the foreign minister wrote on Twitter from the United Nations, where he is to attend the General Assembly.

Rodriguez reaffirmed his country’s commitment to peace in Colombia and said that Cuba “should never be” on the list it returned to in 2021 under the administration of Republican Donald Trump (2017-2021).

At the time, Washington pointed to Havana’s refusal to extradite members of the National Liberation Army (ELN) guerrillas who had traveled to the island to negotiate with the Colombian government.

Democrat Joe Biden’s government placed Cuba on the list along with Venezuela.

Now, a group of Colombian politicians from the Parliamentary Friendship Group with Cuba has asked US Vice President Kamala Harris and Speaker of the House of Representatives Nancy Pelosi to remove the Caribbean island from countries that promote terrorism.

Both the Colombian government and the ELN have rejected this designation for Cuba as a sponsor of terrorism.

The two sides announced the resumption of peace talks after a meeting in Havana last August.

Gustavo Petro’s arrival in the Presidency of Colombia reactivated peace talks with the ELN, which could formally begin in “weeks”, according to one of the leaders of the guerrilla group, nicknamed “Pablo Beltrán”.