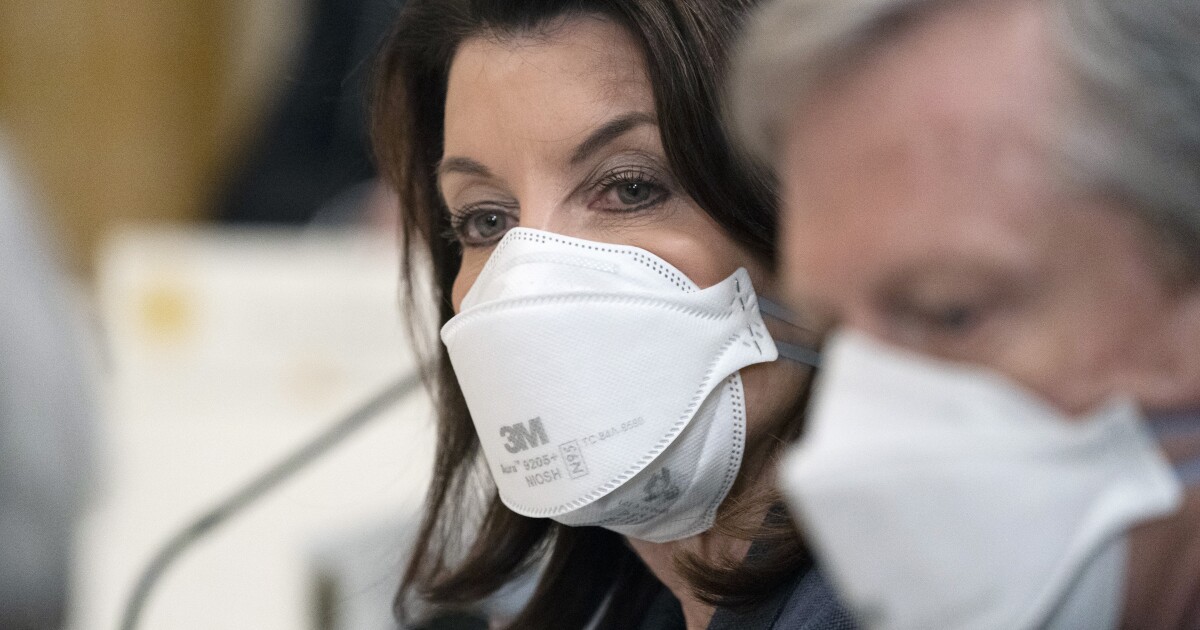 Several Democratic governors are moving to ease some indoor mask mandates, skipping ahead of the US Centers for Disease Control and Prevention and the Biden administration, which continue to urge Americans to wear masks indoors regardless of COVID-19 vaccination status.

The urgency of state officials to ease guidelines reflects recent polling showing growing frustration with the Biden administration’s pandemic response and the electorate’s broader impatience after two years of shifting public health guidelines. With November’s midterm elections looming, some Democratic officeholders aren’t waiting for the president, the CDC or scientific consensus as they take steps to neutralize a potential campaign liability that Republicans have already seized upon.

Spokesmen for Hochul and Murphy both attributed their decisions to a drop in cases and hospitalizations; Newsom also cited the Omicron variant’s wane as a reason to ease some restrictions for vaccinated Californians.

“Governors are picking up on a sense that voters simply won’t tolerate mask mandates any longer,” he said Julia Lynch, a political scientist at the University of Pennsylvania. Lynch questioned that view and noted that the pandemic continues to pummel marginalized communities. “We’re seeing this manufactured dissent around the so-called urgency of normal.”

Americans are increasingly critical of the COVID-19 response from elected and public health officials, and 60% of US adults polled say they’ve felt “confused” as a result of changes to public health officials’ recommendations on how to slow the spread of the coronavirus, up 7% since the summer, according to a January Pew Research Center poll.

Just last month, as Omicron cases soared, the CDC upgraded its stance on high-quality masks, emphasizing that N95 or KN95 masks offer far more protection than cloth face coverings. President Biden launched a program to distribute 400 million free N95 masks to the public. More than a hundred million masks have been distributed to pharmacies and community centers nationwide, according to the White House. And Americans have started receiving free at-home rapid testing kits in another Biden administration program.

The administration continues to recommend indoor masking in areas of high transmission, which, according to White House Press Secretary Jen Psaki, “is basically the entire country at this point.”

Psaki said the president would keep to his campaign promise — defer to the nation’s top scientists in how the federal government responds to the pandemic. Biden got burned for taking a victory lap on his administration’s handling of the pandemic in July when cases were at a low point, only to see the Delta and Omicron variants sicken millions and fill hospitals. The spike in cases prompted federal and local officials to reinstate more restrictive measures.

Still, Psaki acknowledged that Americans had tired of restrictions and said the administration was developing plans to help the nation exit the emergency phase of the pandemic.

In a wide-ranging NBC News interview Thursday, Biden responded to whether states and cities were moving too quickly to loosen indoor mask mandates, telling anchor Lester Holt: “I’ve committed that I would follow the science — the science as put forward by the CDC, and the federal people. And I think it’s probably premature, but it’s, you know, it’s a tough call.”

But Biden acknowledged that the waves of coronavirus variants “have had a profound impact on the psyche of the American people.”

Last week, as the National Governors Assn. met with Biden at the White House, Murphy and others pressed the president to give guidance on how states can live with the coronavirus.

“What does the road from pandemic to endemic look like, and how do we keep score?” Murphy told reporters. “There was a broad agreement that’s the task before us.”

Meanwhile, there is some disagreement among public health experts on how soon the nation should ease restrictions.

Carolyn Cannuscioan associate professor of family medicine and community health at the University of Pennsylvania, said it’s premature for states to lift mask mandates since there are still high rates of community transmission and many hospitals are still overwhelmed.

Though case counts are on the downturn, the country should “be taking advantage of the decline to try to enter into a period of recovery and rest, and masks are an important way for us to continue to reduce transmission,” Cannuscio said.

Lifting mask mandates now may most severely impact marginalized communities, including people of color and immunocompromised Americans, she said.

“We need to keep preventive policies in place in order to allow these people to participate fully in society,” Cannuscio said.

dr Leana Wena public health professor at George Washington University, said because the public can get widely available vaccines and high-quality masks, they’re in a better position to individually “decide the level of risk that they’re willing to take instead of this being a government mandate.”

Wen said that governors’ announcements to ease mask mandates ahead of any new CDC guidance is a result of slow decision-making at the federal level.

“The states have been asking the CDC for months about guidance for what the metrics are for when masks should go from required to optional. The CDC doesn’t even have a timeline even now for when that change is going to be forthcoming,” Wen said. “I think the states frankly said, ‘We can’t wait anymore.’”

Zack Roday, a senior advisor to the nonprofit, said that the pandemic has wholly shifted the political landscape. It has animated not just the Republican base but also independent voters, both of whom will have a long memory regarding their leaders’ COVID-19-related decisions when election season comes, he said.

“Whether that equals a red wave… that is the million-dollar question,” Roday said.

Democratic strategist Jeff Horwitt said the ad doesn’t speak to the reality in schools and reminds voters of the Trump administration’s slow response to the pandemic. “It’s sad they’re trying to attack teachers and trying to score political points when we’re trying to get students in schools safely,” Horwitt said.

“Parents know who the real heroes are: the teachers trying to do right by their kids.”