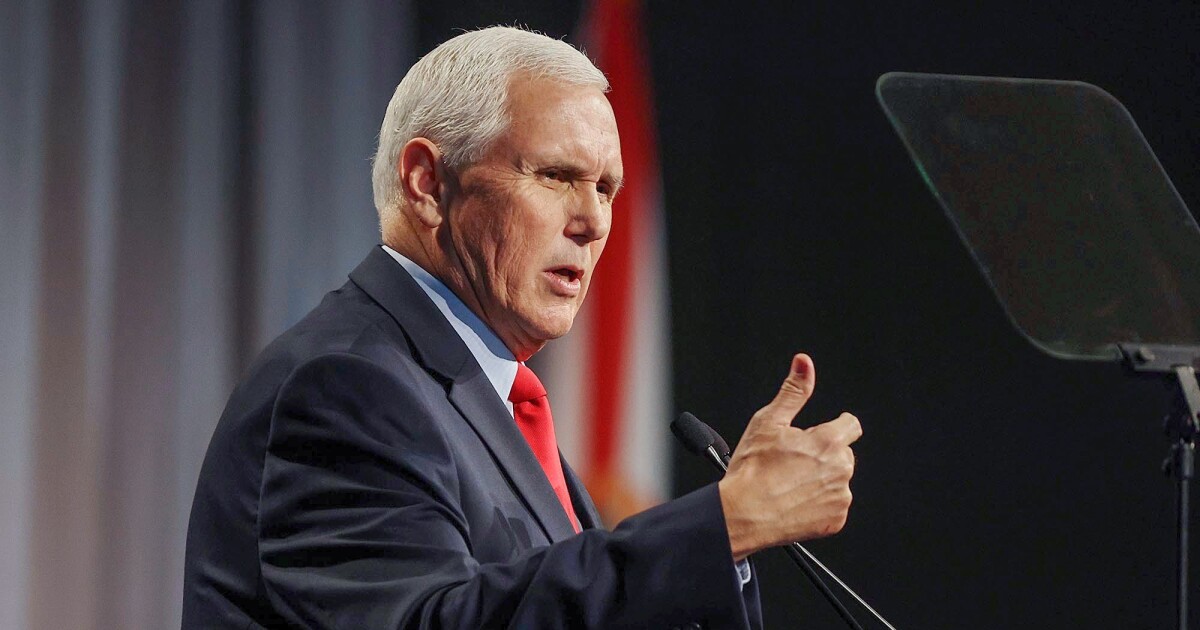 Former Vice President Mike Pence is getting roundly lauded for his bravery in standing up to his ex-boss Donald Trump. At a Federalist Society event on Friday night, Pence expressly said Trump was “wrong” in asserting that as vice president, Pence had the power to overturn the 2020 election.

The former VP’s courage is being wildly overstated. It consisted of little more than restating a position he has already taken, and one he necessarily has to endorse if he is to have any running room to get to the presidency, an office to which he plainly aspires.

Instead of being lauded, Pence should be called out for his failure to oppose Trump on far more important grounds.

Here’s Pence’s grand declaration of independence: “President Trump is wrong. I had no right to overturn the election.” Trump, for his part, had (falsely) said the opposite in a statement a few days earlier.

So yes, Pence used the words “Trump” and “wrong” in the same sentence — which may sound like an act of breathless courage in these strange times, but only in the context of Pence’s sycophantic loyalty over the last six years.

When Pence did his job in the wee hours of Jan. 7, 2020, certifying the electoral college vote, his actions rebuffed Trump’s pressure campaign to violate the Constitution, which clearly limits a vice president’s role in a presidential election to opening the electors’ envelopes .

Pence said as much later, and just as expressly as he did on Friday. For example, in an interview on the Christian Broadcasting Network in Decemberhe said, “From the founding of this nation forward, it’s been well-established that … the only role that Congress has is to open and count the electoral votes that are submitted by states across the country, no more, no less than that .”

It is true that at the Federalist Society, Pence added some bromides to his position. He called the very idea of ​​a vice president overturning an election “un-American” (something he also said earlier on the Christian Broadcasting Network) and he called Jan. 6 a “dark day” — but all of it was well within the safe harbor of what is an uncontroversial constitutional analysis.

Indeed, while Pence gets patted on the back for his boldness and independence, the fact is that even the person who authored the thought experiment, aka gonzo notion, that the vice president could undo presidential election results — lawyer (and former Chapman University professor) John Eastman — apparently never bought it.

Eastman, who recently invoked the 5th Amendment nearly 150 times before the Jan. 6 committee, told the National Review that he was asked by someone — he doesn’t remember who — to write up the theory. Despite what the memo says, Eastman claims he orally advised Trump and Pence that the idea wouldn’t fly.

“Anybody who thinks that that’s a viable strategy is crazy,” Eastman explained to the National Review.

That’s the reality of the legal idea that Pence so valiantly denounced.

Pence’s Federalist Society speech was clearly meant to bolster his attempt to become the leader of the GOP. Just hours earlier, the Republican National Committee had adopted a resolution characterizing the actions of those who stormed the US Capitol on Jan. 6 as “legitimate political discourse.” That will go down as among the most shameful moments in the history of American politics. The party has thoroughly lost its way, and it is now sinking ever more deeply into a trough out of which it cannot climb without acknowledging the truth.

Pence, no less than the leaders of the RNC, well understands that Trump’s claims of having been cheated out of the election are a crock. He is uniquely positioned to call out Trump’s lie and his party’s shame of him, and begin to fight for the future honor of the GOP.

A true act of emperor-has-no-clothes bravery would have looked like this: Pence stepping up to outright denounce the fantasy that the 2020 election was stolen, stating in no uncertain terms that it was free and fair, and that Joe Biden is the rightful US president. That would have demonstrated real leadership.

Instead, Pence’s tepid repetition of an uncontroversial constitutional analysis did nothing more than allow the toxic Trump version of events, the “big lie,” to continue to flourish at the highest reaches of the Republican Party.

Mike Pence’s speech on Friday was far from a profile in courage. Call it rather a profile in political pragmatism. And a huge missed opportunity to do something truly brave for his country and party with him.