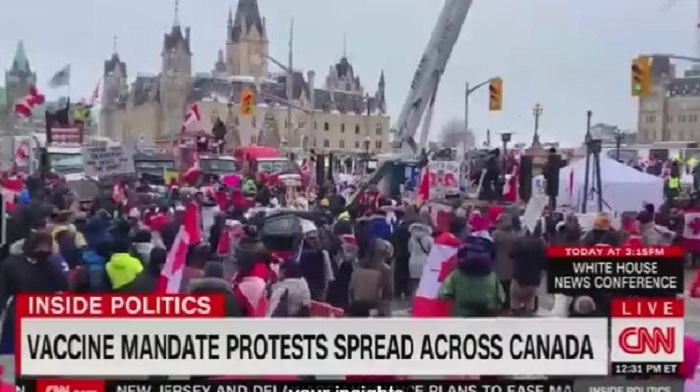 Table Of Contents hide
1. CNN calls Freedom Convoy ‘sedition’
1.1. Support conservative voices!
1.1.1. Sign up to receive the latest political news, information and comments sent directly to your inbox.
2. Military action against the convoy
3. Like this:


CNN reporters are apparently out of their minds over the Canadian trucker ‘Freedom Convoy’, referring to the protest as “sedition” and a “national insurrection”.

The convoy is a massive and peaceful demonstration against the cross-border vaccination mandate between the US and Canada, introduced by the Government of Canada on January 15, 2022.

But journalists engaging in a conversation about protesters for “Inside Politics” are suddenly haunted by the concept of protest.

“Thousands of Canadians, you see the photos there, protesting vaccination mandates,” he continued. “It started with the so-called ‘Freedom Convoy’ led by truckers protesting a new mandate that requires vaccinations to enter the country.”

CNN claims that the peaceful protest by Canadian truckers is a “madness-driven insurrection,” a “threat to democracy,” and a form of “sedition.”
Reporter Paula Newton reassures views: “Prime Minister Justin Trudeau remains isolated at an undisclosed location.” pic.twitter.com/uHUXFsPbVu

“And just think about the language. I know it sounds familiar to you. A threat to democracy. An insurrection, a sedition,” added Newton.

“I want to make it clear that things have calmed down a bit, but that doesn’t detract from the basic protest, right, the sit-in that’s taking place right in front of the national parliament.”

While CNN commentators repeat phrases used by Canadian officials, their choice to cover those comments, rather than comments from the pro-protest side, reveals where their sympathies lie.

You can already see where this is going, right? The media is going to use the term ‘insurrection’ before any signal of protest that is generated from a conservative or right-wing cause.

The ‘Freedom Convoy’ is now an insurrection.

It is only a matter of time before parents who oppose school mandates or curricula are called ‘insurgents’. They have already been labeled by the Democrats as domestic terrorists.

Like the race card, the term will be used so often by Democrats and the media that it will no longer have any true meaning.

Good balanced reporting on CNN’s Canadian trucker protests: “Sedition, insurrection, a threat to democracy. This is how they are perceiving this protest now.”https://t.co/dwsqkNukMN

Military action against the convoy

King and Newton were motivated by comments made by the Ottawa police chief, who referred to the truckers’ protests as “an insurrection fueled by madness.”

“This is a threat to our democracy. There is an insurrection across the country,” Ottawa Police Chief Peter Sloly said, adding: “This is crazy.”

Sloly, according to the Washington Postwas reflecting on comments made by Diane Deans, president of the Ottawa Police Services Board, though she agrees with the sentiment.

He is not driven by madness. The protests are fueled by focused and righteous opposition to government overreach.

Politicians in Ottawa are talking about bringing military might down on these people. https://t.co/uTf91Hn6Zv

Sloly had previously worried that the protests were getting out of hand and hinted that military action was being considered to quell the gathering.

“The range of illegal, dangerous and unacceptable activities is beyond the ability to enumerate and the time we have there today”, Sloly said at a meeting city ​​councillors.

Contrary to his assessment, a New York Times report indicates that the convoy has been “raucous but largely peaceful.”

there you have there have been 20 arrestsbut especially for those who try to get fuel to truckers so they can heat their vehicles.

And fortunately, Trudeau has, for now, ruled out using the military.

Remember when the left wanted the workers of the world to unite?