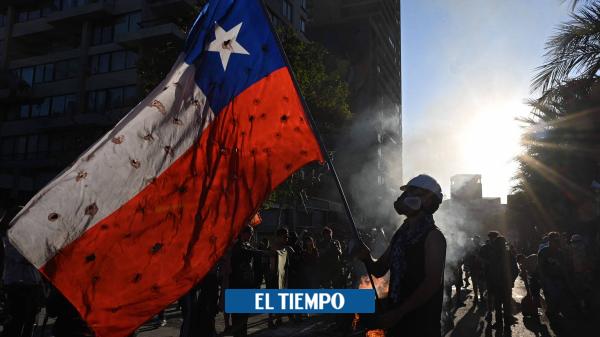 Table Of Contents hide
1. security breach
2. Other international news:
3. Like this:

leaked by hackers over 400,000 Secret Email Messages A new case of the Joint Chiefs of Staff (EMCO) and alleged corruption has sparked a new crisis in Chile and led to resignations and prosecutions in the military, an institution whose reputation is still deteriorating.

(Too: ‘Mom, I killed him’: message from the girl who stabbed her brother to death,

As reported this Friday, Chilean justice ordered prosecution Five generals in retirement for their alleged responsibility in the alleged repeated offenses of embezzlement of public funds Equivalent to 455 million pesos (about $500,000).

(Also read: Why does no country in Latin America have an atomic bomb?,

Martial Court guest minister, Romy Rutherford, in charge of the “Army fraud” case and its many aspects, investigates crimes allegedly committed between December 2007 and March 2018, in that framework dozens of officers and former officers are prosecuted. He runs the Chilean military wing.

(Of interest: Cuba thanks Colombia for its request to remove it from the US terrorism list.,

Stagecoach stands as the final scene to date A long parade of active and retired soldiers through the courts of ChileIn acts of corruption where the main characters have been members of the High Command.

The purchase of properties, luxury cars, trips, parties and tours with financial resources is part of a financial shelf. 46 notebooks filled with 1,392 volumes and multiple edgess, and an alleged embezzlement of the national treasury which so far exceeds 8.5 million euros.

This is not the first time that the leadership of the Chilean military has been investigated in a democracy for crimes related to illegal enrichment, a practice which according to historians was deeply rooted during the dictatorship of Augusto Pinochet (1973–1990).

Ever since democracy returned, all the commanders-in-chief of the Chilean military have been linked to millionaire fraud, with Humberto Oviedo, Juan Miguel Fuentalba and scar Izurrita also being prosecuted for corruption crimes.

(Of interest: María Belén Bernal: What is known about the lawyer’s murder in Ecuador?,

The new judicial charge coincides with the timing of the massive leak of EMCO emails made by the group of hackers Guacamaya, who Over 400,000 messages and several documents classified as “Reserved”, “Secret 2” and “Top Secret” have been uncovered.,

The leak forced the defense minister, Maya Fernandez, to urgently return to Chile from New York, where she was at the UN General Assembly with the republic’s President Gabriel Boric, and to leave the EMCO chief on Thursday. General Guillermo Paiva.

“Faced with known facts regarding the security failure of the emails of the Joint Chiefs of Staff, the President of the Republic has directed the Minister of National Defense to return to the country to lead the response to these incidents,” he communicated to the Chilean government. From.

as well as handing over records to military justice to promote criminal investigations, Executive ordered an administrative summary to set out related responsibilities,

Meanwhile, Congress has already acted and its National Defense Commission has summoned the Secretary of State as well as the Under Secretary and the head of EMCO to ascertain the scope of the leak. According to local investigations, the leaked files included data on cyber security, communications and border surveillance, as well as sensitive information on intelligence and satellite surveillance systems.

On 19 September, and during the Armed Forces Protocol Parade on the occasion of national holidays, groups of attendees – some relatives of members of the government – insulted and insulted President Borik – in an act without precedent in modern times and What came to the fore was criticism of the government and part of the political class.