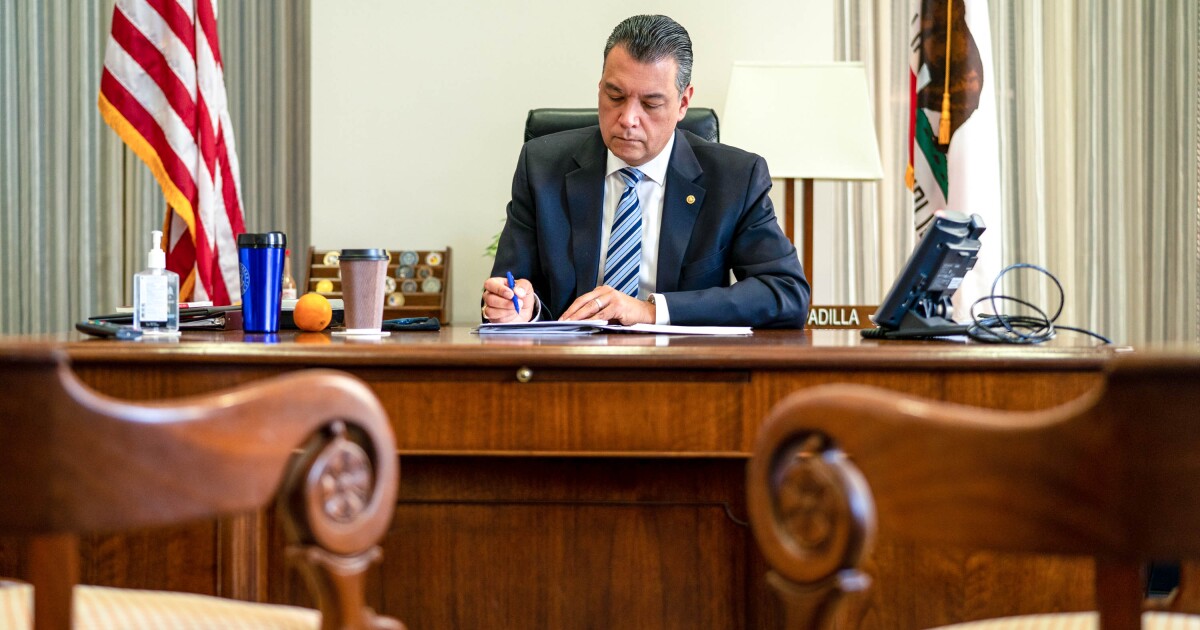 A bipartisan effort on Capitol Hill to place parameters on the country’s biggest tech companies has found new support in recent weeks, yet is dividing Democrats as they confront a long-held campaign pledge.

7:57 a.m. Feb. 1, 2022An earlier version of this story misidentified Amazon’s headquarters. It is based in Seattle.

It’s a debate that has thrust both of California’s senators into the forefront, given their roles on the committee that oversees the issue as well as representing the home of the several companies the effort targets: Apple, Alphabet and Meta.

California Sens. Dianne Feinstein and Alex Padilla, both Democrats, supported the leading tech antitrust bill in the Senate Judiciary Committee last month, but demanded significant changes if it is to get their support on the Senate floor.

That bill, the American Innovation and Choice Online Act, would prohibit the dominant technology companies from boosting their own products versus competitors.

The companies, which strongly oppose the leading bill and have poured millions of dollars into combating it, argue it would compromise consumer privacy and security, and interfere with their ability to provide popular products, such as map and search apps.

The Democrats’ bill is the tip of the spear of a handful of major pieces of legislation in both chambers that would rein in the tech companies.

A companion Senate bill, which prohibits the companies from giving preference to their own products in their app stores, will go before the same committee this week. Another group of regulatory bills, one of which would make it easier to break up major tech companies, is sitting in the House.

Proponents, led by Sen. Amy Klobuchar (D-Minn.), argues the time has come for Congress to begin to regulate the internet and the companies that dominate it.

Klobuchar is now on a quest to gather 60 votes for the bill. She’s relying on the unusual bipartisan interest — the bill was supported by 11 Democrats and five Republicans on the Judiciary Committee — in the tech space.

Some Democrats are eager to break up the monopolistic power of the tech companies, while Republicans want to push back against what they call discrimination against conservatives.

Klobuchar said she’s willing to hear out the issues expressed by Feinstein, Padilla and others.

“At some point, it’s going to be an up or down vote. Either people want to do something about monopoly power or not,” Klobuchar said in an interview. “I am more than willing to talk with not only these two senators, but others as well.”

The key question would be whether she can make enough changes to win over her colleagues while ensuring it is not a “do-nothing bill,” in her words.

“I am sure we will make additional changes. But they have to be changes that do not undercut the major focus of the bill, which is to stop the self-preferencing and discriminatory behavior of the company,” she said.

However, it is unclear whether some of the major points of contention are negotiable. For instance, Feinstein and Padilla — as well as several other Democrats — expressed concern that the bill targets the three tech companies.

“We should continue to legislate in a way that applies fairly to everyone who engages in the behavior we’re concerned with and not just a few,” Feinstein said, adding that it could apply to Redmond, Wash.-based Microsoft as well. “It’s specifically designed to target a small number of specific companies, most of which are headquartered in my home state of California.”

She said it could be “very dangerous legislation.”

But one of Klobuchar’s top goals is to break up the monopoly at the largest tech companies.

Sen. Ted Cruz (R-Texas) praised the bill’s language that would make it harder to block conservative publications, tapping into a substantial reason that conservatives want to rein in Big Tech and why they could ultimately back the bill.

However, Padilla raised concern that the same language would also prohibit the tech companies from eliminating hate speech or other disinformation. It could “be a gift to bad actors seeking to prevent platforms from blocking business users that peddle hate speech or imagine election disinformation,” he said.

Feinstein and Padilla also criticized that the bill didn’t go through a full hearing before the committee approved it last month, saying it was a rushed process that could lead to unintended consequences.

The bill’s path forward isn’t certain. There are only a few months left before the midterm election crowds out the chance for legislating, and it is unlikely the bill would come to the floor unless Klobuchar can assure Senate Majority Leader Charles E. Schumer (DN.Y.) she has 60 votes .

While the retirement of Supreme Court Justice Stephen G. Breyer has added to the Senate’s lengthy legislative to-do list, a bill that is perceived by the public to rein in Big Tech could prove popular in an election year.

The effort could get a boost if Biden mentions it in his March State of the Union speech, a high-profile opportunity to put the power of the White House behind the measure.

In the hearing, Feinstein suggested that some federal agencies oppose the bill, a comment that prompted sharp rebuke from the bill’s backers. Feinstein did not name the agencies, saying she heard about opposition secondhand.

The White House has sat out the debate over the bills. But it gave technical feedback on the bills last year when asked by lawmakers, according to a White House official. Biden has also generally expressed support for more competition in the tech industry.

The tech companies have stepped up their already sizable Washington presence to fight the bill. Cruz said Apple Chief Executive Tim Cook called him to make his case. The Chamber of Progress, a tech industry group that opposes the bill, ran ads with a line from Feinstein saying, “The bill causes some very significant security concerns,” even though she ended up supporting the bill in committee.

Apple says allowing consumers to download apps outside its App Store would open the door to security risks.

Amazon says the bill would put at risk its ability to allow small businesses to sell on its platform and guarantee one- or two-day shipping. The company said Congress is trying to “rush through an ambiguously worded bill with significant unintended consequences.”

Google said the bill would require it to change its search algorithms in Google Search or Google Play, and “we might have to give equal prominence to a raft of spammy and low-quality services.”