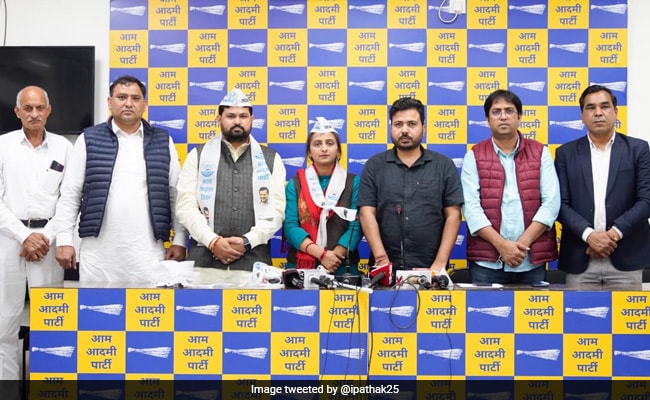 Welcoming them into the party’s fold, AAP leader Durgesh Pathak said many people are joining the AAP after being influenced by the work done by Delhi Chief Minister Arvind Kejriwal.

It reported that Priya Chaudhary won the Delhi University Students Union Elections in 2011-12, she was its Vice President. She was also a BJP National Media Panelist and Secretary to Mahila Morcha of the BJP in the national capital.

“Pawan Sharma will also join the Aam Aadmi Party, who is the Congress Leader of the Ghonda Assembly of Delhi,” he added.

After joining AAP, Priya Chaudhary expressed her gratitude for welcoming her into the party, saying there is “no respect” for BJP workers.

“I want to thank Aam Aadmi Party who gave me a place in the party today. We want to do a lot of work but we were victims of petty politics somewhere, the same thing was happening in BJP. There is no respect for workers in Delhi BJP today. By joining AAP I can be a part of a big change, instead of wasting my energy I will take it in the right direction,” he added.

Meanwhile, Pawan Sharma said he is impressed by AAP’s rapid development of Delhi.

“Today I am joining the party after being impressed by the rapid development work done by AAP in Delhi. I want to work for the people by joining their campaign to end corruption. We will remove corruption from the MCD and make AAP rule there too. ” he added.

UP man arrested for sending obscene messages to lawyer: Police