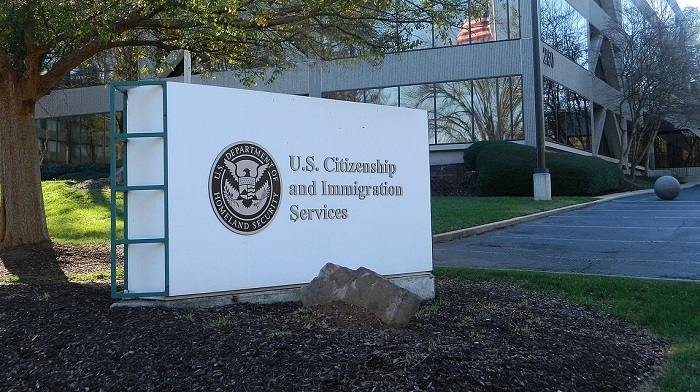 Table Of Contents hide
1. Immigration Mission Statement
1.1. Support conservative voices!
1.1.1. Sign up to receive the latest political news, information and comments sent directly to your inbox.
2. Focused on harmful words
3. Like this:


The Biden Administration has eliminated the words “legal immigration” and “protecting Americans” from the official mission statement of the United States Citizenship and Immigration Services (USCIS).

The statement now reads: “USCIS holds the promise of America as a nation of welcome and possibility with fairness, integrity, and respect for all we serve.”

Notably missing from the declaration were some changes the agency made under President Trump, including the aforementioned terms “legal immigration,” “protect Americans,” along with “secure the homeland.”

In 2018, USCIS removed the phrase “nation of immigrants” from its mission statement and instead focused on its work to promote legal immigration “while protecting Americans.”

The statement since said:

“U.S. Citizenship and Immigration Services administers the nation’s legal immigration system, safeguarding its integrity and promise by efficiently and fairly adjudicating applications for immigration benefits while protecting Americans, securing the homeland and They honor our values.”

Starting today, US Citizenship and Immigration Services has a new mission statement. Under Biden, USCIS removed mention of “legal immigration,” “protect Americans,” or “secure the homeland” and now simply “…holds the promise of America as a welcoming nation…” pic.twitter.com/flN0NPr4Q7

Prior to the Trump administration’s 2018 edition, the immigration agency’s mission statement focused on new immigrants as “clients” and granted them “benefits of citizenship,” while promising to secure “America’s promise as a nation of immigrants.

USCIS Director Ur Jaddou, announcing the reversal of Trump-era changes in a statement, says, “The United States is and will continue to be a welcoming nation that welcomes people from all over the world.”

Illegal immigrants must, however, be deterred from entering the country illegally…by USCIS.

In the ‘Core Values’ section of the USCIS website, they to mention defend “the security and integrity of the immigration system” that will convey “the privileges and advantages of lawful presence in the United States.”

INBOX: @USCISDirector announced a new mission statement: “USCIS upholds the promise of America as a nation of welcome and possibility with justice, integrity, and respect for all we serve,” 4 years after the Trump administrator removed the “nation of immigrants”.

Less than a month into his presidency, Biden began a new directive that would prohibit the use of the terms “alien” or “illegal alien” in official immigration communications.

The preferred term under the new administration has been “non-citizens” or other “inclusive” terms.

NEW: DHS officials have been directed to remove words like “alien” and “illegal alien” from communications with the public when referring to people who are not U.S. citizens in an effort by the Biden administration to reword the terminology of immigration.https://t.co/c3jvBhHZYy

Axios reported at the time: “The Trump administration referred to unauthorized immigrants as ‘illegal aliens’ and described border crossings as an ‘invasion.'”

The term “foreigner” is actually the legal definition as defined in the Immigration and Nationality Act enacted in 1952.

It is used throughout and is defined as a term that “means any person who is not a citizen or national of the United States.”

Lee Cissna, the former director of USCIS under Trump, had explained the importance of a mission statement that speaks of “legality” and “safeguarding the homeland”.

“We are … responsible for ensuring that those who naturalize are dedicated to this country, share our values, assimilate into our communities and understand their responsibility to help preserve our freedom,” he said.

Values ​​and laws now yield to the “promise as a host nation.”