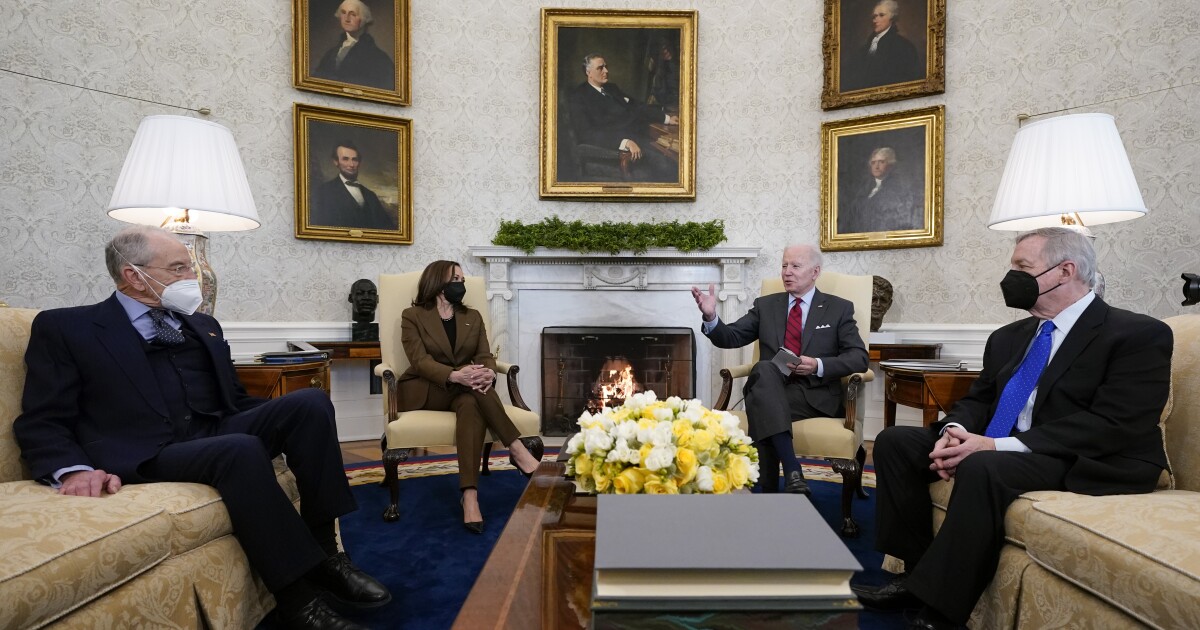 President Biden met with two key senators in the Oval Office on Tuesday as the White House sought to build congressional support for his eventual Supreme Court nominee.

Speaking to reporters before the meeting, Biden described the two senators — Democrat Richard J. Durbin of Illinois and Republican Charles E. Grassley of Iowa — as “good friends,” adding that he is “serious when I say I want the advice of the Senate as well as the consent.”

The president, who was joined at the meeting by Vice President Kamala Harris, said he is “looking for a candidate with character, with qualities of a judge in terms of being courteous to the folks before them and treating people with respect.”

Biden has pledged to use the vacancy to nominate the first Black woman to serve on the high court. If confirmed, she would replace 83-year-old Justice Stephen G. Breyer, who announced his retirement from him last week.

The last three Supreme Court vacancies resulted in partisan warfare in the Senate, as Democrats objected to then-President Trump’s picks because of Senate procedure or the nominee’s background. All three eventually were confirmed, giving the court a 6-3 conservative tilt.

Grassley, in a statement after the meeting, urged “bipartisan consultation to continue” in the nomination process.

“As I have said before, our job is to conduct a thorough review of the nominee’s qualifications, temperament and fidelity to the Constitution,” the senator said. “Our process should be full, fair and deliberate. For me, a justice ought to interpret laws according to text and original meaning, not make law from the bench.”

Durbin, chairman of the Senate Judiciary Committee, told the president he was committed to “ensuring the nomination process is both fair and timely, that senators will have the opportunity to thoroughly consider the nominee’s record, and that the nominee will receive a prompt confirmation vote ,” said Emily Hampsten, a spokesperson for Durbin. “[The senator] also stressed he is confident the president will choose an outstanding nominee from the many highly qualified candidates reportedly under consideration.”

Biden’s promise to nominate a Black woman — she would be the third Black justice and the sixth woman to serve on the court — has drawn fire from some Republicans who complain that such criteria has limited the pool of candidates.

Sen. Roger Wicker (R-Miss.) on Friday said Biden’s pick would be a “beneficiary” of affirmative action and would “probably not get a single Republican vote.” Sen. Ted Cruz (R-Texas) on his podcast this week suggested Biden’s search was “offensive.”

Republican Sen. Lindsey Graham of South Carolina took a different approach, saying there was a need for diversity on the bench.

“Put me in the camp of making sure the court and other institutions look like America,” Graham said during an interview with CBS on Sunday. “President Reagan said, running for office, that he wanted to put the first female on the court. Whether you like it or not, Joe Biden said, ‘I’m going to pick an African American woman to serve on the Supreme Court.’”

Graham praised Childs, a federal judge in his state, as being “incredibly qualified.”

“The more Americans look at our courts and see people who look like them and come from the same backgrounds and share similar experiences, the better off our justice system and our democracy will be,” Schumer said during a news conference. “America changes and evolves and moves and so should the Supreme Court.”

Senate Minority Leader Mitch McConnell (R-Ky.) and Biden spoke about the nomination on Tuesday, according to a spokesman for the Senate’s top Republican. McConnell “emphasized the importance of a nominee who believes in judicial independence and will resist all efforts by politicians to bully the court or to change the structure of the judicial system,” the spokesman said.