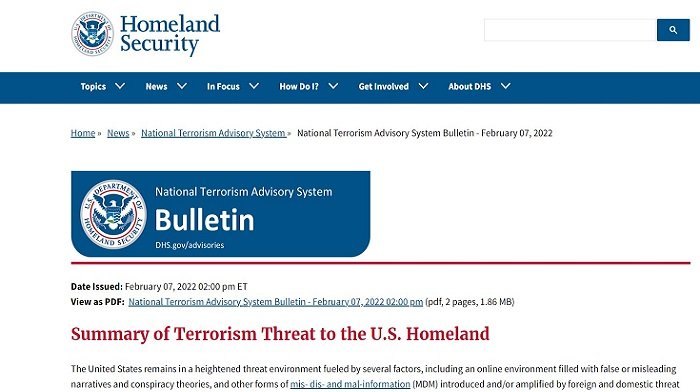 Table Of Contents hide
1. Support conservative voices!
1.1. Sign up to receive the latest political news, information and comments sent directly to your inbox.
2. DHS is fighting disinformation terrorists
3. illegitimate elections
4. Like this:


The Biden administration’s Department of Homeland Security (DHS) has issued a new summary report on terrorist threats that focuses on individuals or organizations spreading “misinformation” designed to undermine trust in government.

The bulletin “Summary of the Terrorist Threat to the National Territory of the United States”, published on Mondayindicates the United States is in a “heightened threat environment,” particularly against “false narratives” around voter fraud and COVID.

They also created a new acronym that we are sure to see in the mainstream media in the near future.

“The United States remains in an environment of heightened threats fueled by a number of factors, including an online environment filled with false or misleading narratives and conspiracy theories, and other forms of disinformation and misinformation (MDM) introduced and/or amplified by security actors. domestic and foreign threats,” the document says.

“Complaints associated with these issues inspired violent extremist attacks throughout 2021,” they write.

So some of us wonder, @DHSgov …

“DHS is working with public and private sector partners, as well as foreign counterparts, to identify and assess MDM,” the bulletin states.

Which foreign counterparts are helping to crack down on election information?

Anyone who distrusts the government is now a terrorist.

Against the backdrop of targeting ‘disinformation’, which at one point would have included stories discrediting the Steele dossier, nearly all Current COVID story and Hunter Biden laptop news: DHS is encouraging people to report anyone they see engaging in such activity.

The Associated Press writes: “Concern over the midterm elections comes as many Americans are already skeptical about the results of the November 2020 election due to repeated unsubstantiated claims of fraud by former President Donald Trump and his allies.”

Furthermore, they ominously insinuate that the elections could be potential targets:

“The alert warns that in the months leading up to the midterm elections, extremists could use online forums and other methods to call for violence on democratic institutions, candidates, party offices, polls and poll workers.” .

They see the First Amendment as a threat to the government…

But they may have unknowingly tied the Democrats down.

“The months leading up to the upcoming 2022 midterm elections could provide additional opportunities for these extremists,” they write.

The Political Insider reported at the end of January that several Senate Democrats are contemplating pushing a narrative that the 2022 midterm elections are illegitimate due to Republican opposition to passing their national ballot bill.

“Democrats believe there is plenty of evidence that Republicans are trying to steal future elections and feel bolstered by the extensive reporting by CNN, NBC and other media outlets on state-level machinations by Trump allies,” according to The hill.

Sounds like a conspiracy theory to me. Is the Department of Homeland Security monitoring these potential MDM terrorists?

President Biden himself has theorized that the midterm elections the results could be “illegitimate.”

This second bid by Biden on whether the election will be legitimate is even worse.

“Oh yeah, I think it could easily be illegitimate… The increase in the possibility of being illegitimate is proportional to not being able to pass these reforms.” pic.twitter.com/nCyuAWSMXm

Hello DHS. I see something. And now I’m saying something.

The DHS terrorist disinformation threat should come as no surprise. The Department of Justice (DOJ) announced the formation of a unit to combat domestic terrorism just days after the anniversary of the 2021 riots on Capitol Hill.

And once again, the emphasis was on stamping out anti-government rhetoric.

“We have seen a growing threat from those who are motivated by racial animosity, as well as those who espouse extremist ideologies against government and authority.”

“The US government will also work to find ways to counter the polarization often fueled by disinformation, misinformation, and dangerous conspiracy theories online by supporting an information environment that fosters healthy democratic discourse,” the White House said. fact sheet read

What better way to crack down on your opponents’ political speech than to label them as purveyors of “disinformation” and then apply the full force of DHS to them in an effort to combat terrorism?