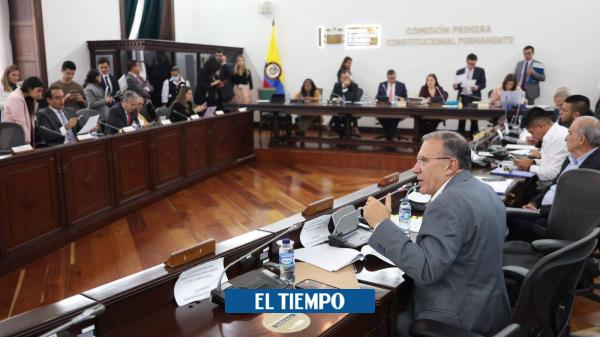 Table Of Contents hide
1. These are some of the key points of the reform:
1.1. Like this:

The Congress approved in the first debate the political reform of the Government of Gustavo Petro which had been filed last Tuesday, September 13, by the Minister of the Interior, Alfonso Prada.

(In context: Political reform was filed by Minister Alfonso Prada: the key changes)

The rapporteur coordinator, Roy Barrerascelebrated its approval and affirmed that this legislative act has two fundamental changes: the first is that it closes the list to avoid the buying and selling of votes and the corrupt clientelistic system, with state financing predominantly for parties and not for candidates considered individually. And the second is that it makes it mandatory that the lists be integrated respecting gender parity and diverse identities, correcting a historical error in the electoral system.

Barreras added that “the closed list in modern democracies has several effects and one of them is that the funding is from the state for the parties and not for the people. In addition, it allows leaderships to arrive that do not have political structures, as well as the parties assuming themselves as governing parties, so that those who win the election govern. This allows a party to ask someone elected on a closed list to go to government and that person abide by those party decisions.”

The text of the presentation political reforma also stipulates the Limit to re-election within public corporations of popular election. No one may be elected for more than four consecutive terms in the Senate of the Republic, House of Representatives, Departmental Assembly, District or Municipal Council, or Local Administrative Board.

These are some of the key points of the reform:

-Parties may only register closed and blocked lists with a guarantee of universality, alternation and gender parity and diverse identities.

-The duty to implement mechanisms of internal democratization in the collectivities is established, its non-compliance will carry sanctions to the party such as the loss of legal status.

-The financing of the parties will be predominantly state-owned and will go directly to the parties, and not to the candidates, which eliminates the conflict of interest that arises when the financing is personal.

-If a member of a public corporation stands for the next election, for a different party, he must renounce the seat at least six months before registration. And it is guaranteed that those who want to aspire to a position of popular election must have at least 6 months of militancy within the community.

– The members of the Collegiate Bodies of popular election, or those who have resigned their seat, are authorized only once to enroll in a party other than the one that endorsed them, without resigning the seat or incurring double militancy.

-In order to strengthen the citizen culture of participation in the country’s political and electoral decisions, compulsory voting and the state’s duty to guarantee free public transport services on election day are created for two consecutive constitutional terms.

– Congressmen will be able to go to the executive.