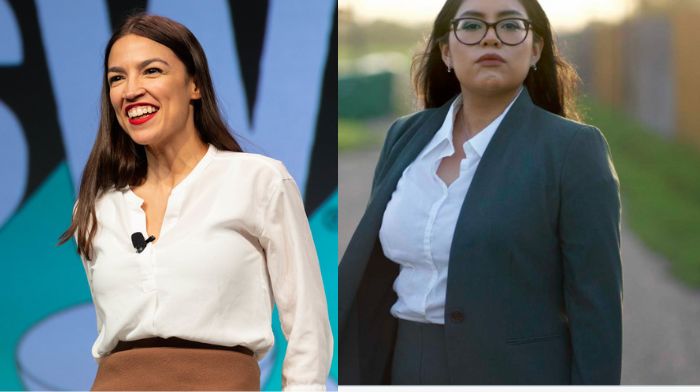 Table Of Contents hide
1. Progressives trying to turn Texas blue
1.1. Support conservative voices!
1.1.1. Sign up to receive the latest political news, information and comments sent directly to your inbox.
2. Who are the justice democrats?
3. purging the party
4. Like this:


In an effort to increase the membership of the “Squad” and push the Democratic Party even further to the left, Rep. Alexandria Ocasio-Cortez heads to Texas later this week to headline a rally and campaign for two far-left progressive candidates.

One of the candidates that Ocasio-Cortez supports is Jessica Cisneros. She is challenging incumbent Democratic Rep. Henry Cuellar in Texas’ 28th congressional district for the second time.

Cuéllar has stirred up his party for being one of the democrats only to oppose open borders.

Texans, are you ready? 🤠

Next Saturday, February 12, we will participate in an important DOUBLE RALLY to send @GregCasar + @JCisnerosTX to Congress and support community organizing across the state.

The second time may be the charm for Cisneros. Progressive Democrats have surely taken advantage of the fact that Cuellar has some problems of his own, including being under investigation for “alleged improper ties to Azerbaijan.”

“Few House members did more to ensure the demise of the Biden agenda than Cuellar, who teamed with the Chamber of Commerce and fellow ConservaDems to vigorously oppose the Build Back Better Act.” https://t.co/67g8wQIs3U

Who are the justice democrats?

A group calling itself the Justice Democrats backs both Cisneros and Casar.

The Justice Democrats were founded in 2017, and a quick look at the mission statement on their website tells you everything you need to know:

“We need a Democratic Party that fights for its voters, not big corporate donors. Our goal is to build a mission-driven caucus in Congress by electing more leaders like Alexandria Ocasio-Cortez and Jamaal Bowman who will represent our communities in Congress and fight for bold, progressive solutions to our current crises.”

Want to know who to thank for the “Squadron”? Look no further than the Justice Democrats. They recruited and endorsed Ocasio-Cortez and every other member of the far left group in Congress.

NEW@RepCuellarcampaign stmt hits @AOC and your next trip to TX:

“Voters will decide in this election no to the far-left celebrities who advocate defunding the police, opening the borders, eliminating oil and gas jobs, and raising taxes on hard-working Texans.” https://t.co/dQ1ZDtidCv

The other candidate Ocasio-Cortez is stumped about is former Austin City Councilman Greg Casar, who is running for Congress in Texas’ 35th Congressional District. The The Austin Monitor describes Casar as a “community organizer.” His campaign website says he helped pass, among other progressive wish-list items, “the most progressive labor policy for the entire state and possibly the American South” in Austin.

But it may not be so easy for Democrats in border districts that have large Hispanic populations. An interesting change is emerging, a shift from Hispanic former Democrats turned Republican women running for public office in those border districts. Two of those candidates say the Democratic Party does not represent Hispanic values ​​and has gone too far to the left.

Cuellar is the only moderate Democrat facing a primary challenge from a progressive. Democratic strategist Joe Caiazzo says the answer to why only a moderate is questioned is easy, most incumbents agree with the progressives’ agenda.

“When you look around, almost the entire Democratic conference in the House supports things like infrastructure, reproductive rights, expanding access to affordable health care, reducing child poverty, voting rights, all the key principles of the Democratic Party platform. .”

🔥 NEW: I am honored to be endorsed by @AOC! Together, we are committed to a bold agenda for working families.

Join the movement to help us restore voting rights, reproductive rights, and worker rights in Texas. Help us win on March 1 with a donation! 👉🏽 https://t.co/KQKZB7GgAd pic.twitter.com/dDOYzy2Ogo

Jordi Sànchez will vote in favor of continuing in the Government