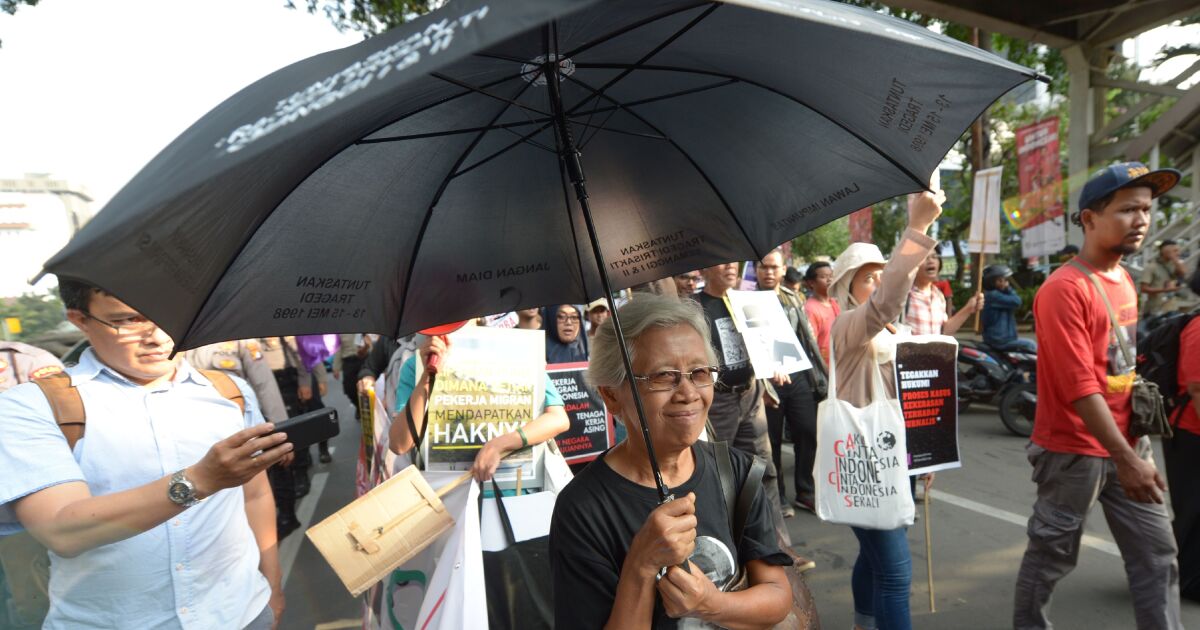 Every Thursday for Maria Catarina Sumarsih begins the same: make breakfast for her husband and daughter, pray the Rosary, prepare the placards, grab her umbrella and head toward the palace, where for the last 15 years she has camped in the tropical heat, protesting the death of her son.

His name was Wawan. A 20-year-old university student who loved his mother’s cooking of her, especially her nasi goreng and satay, he was killed in 1998 when Indonesian soldiers fired on young protesters demanding political reforms. She did not know at first how to channel her grief other than to visit her grave in the capital city, Jakarta.

But as the years passed, Sumarsih turned despair into anger—at times throwing eggs at members of parliament who had absolved the army of wrongdoing—to become a relentless symbol of a woman seeking justice. Her frail frame and shock of white hair arrive every week at the park in front of the president’s colonial-era palace, a reminder that a simple act of defiance carries indelible power in holding a nation accountable for its past sins.

Her closets bake in the sun.

The din of the city’s notorious traffic does not determine her.

“I transformed my sadness into a fighting spirit,” she said.

Sumarsih inspired a human rights movement in an Indonesia that’s failed to reckon with a history woven with atrocities.

Families of other victims soon joined her, wearing black and carrying umbrellas in solidarity. They included Suciwati, the wife of Munir Said Thalib, a rights activist poisoned in an assassination believed to have been orchestrated by Indonesia’s State Intelligence Agency. And former political prisoner Bedjo Untung, who endured years of torture and spoke for the hundreds of thousands killed in anti-communist purges in the 1960s.

The 69-year-old Sumarsih guesses she’s been absent only two dozen times, and only because of travel, illness or COVID-19 lockdowns. The police who guard the perimeter of the palace are so accustomed to seeing her that they’ve come to call her “Mother Sumarsih.” Her persistence of her has emboldened thousands of mostly young people to join her in raucous demonstrations across the island nation. They call it Aksi Kamisan, or Thursday Action.

“I raised the first time I came to one of the protests,” said Vebrina Monicha, a 23-year-old law student at the same school Wawan attended, Atma Jaya Catholic University. “I didn’t know much about the wrongs in this country. I lived carefree and never thought about having to fight for something in life.”

Indonesia has gradually transformed from an authoritarian state reeling from the Asian financial crisis into the world’s third-largest democracy and Southeast Asia’s biggest economy. The country of 270 million has grown in geopolitical stature, a vital player in the Biden administration’s Indo-Pacific strategy to compete with an increasingly powerful China. Civil society and an independent press persist. Homegrown art and technology are flourishing.

Despite that progress, the country remains unable — and many say unwilling — to reckon with its past. No official accounting has been made of one of the worst atrocities of the last century, when the Suharto governmentlater called the New Order, killed hundreds of thousands of Indonesians accused of being communists — estimates of the death toll vary from 300,000 to 2 million.

The purge, which began in 1965, targeted perceived opponents of the US-backed dictator and forced millions into prison camps. The frenzy left a gash in the nation’s psyche that’s festered for generations. Across Indonesia, killers still live in neighborhoods side by side with their victims’ families, burying their collective trauma in unspoken silence.

Thirty-two years after the slaughter, the country erupted in violence again amid a financial crisis that would lead to the downfall of Suharto. Thousands died as mobs burned down homes and stores. Ethnic Chinese neighborhoods were ransacked and women were raped.

The unrest brought students and pro-democracy supporters to the streets, resulting in three separate mass shootings by soldiers: the Trisakti University shootings, which left four students dead; the first shooting around Atma Jaya university that left 17 people dead, including Wawan; and the second Atma Jaya shooting that left a dozen people dead.

No senior leaders have been prosecuted for the killings. The impunity reflects the power of the Indonesian military, even decades after Suharto was ousted and replaced with a civilian government. Many of the generals who presided over rights abuses remain in positions of authority, such as the formerly exiled and politically rehabilitated defense minister, Prabowo Subianto, and presidential advisor Wiranto, who headed the Indonesian armed forces during the 1998 shootings.

“The military may not be as powerful as before, but it is still the most influential institution in Indonesia,” said Made Supriatma, an Indonesian expert and a visiting fellow at Singapore’s ISEAS–Yusof Ishak Institute. “No political regime can survive without the military. The generals who inherited the New Order ideology are still there and still powerful.”

Attempts to establish a truth and reconciliation commission founded over disagreements about whether rights abusers should face criminal charges. In 2020, Atty. Gen. Sanitiar Burhanuddin said the Atma Jaya university killings did not constitute a mass violation of human rights.

The lack of justice has driven some to desperation. Asih Widodo, the 71-year-old father of a civil engineering student killed by army gunfire the same day as Wawan, circles Jakarta on a motorcycle plastered with pictures of the teenager in suit and tie and signs that say, “My son was killed by the Indonesian National Armed Forces.”

So I would drive more, he said, if he could afford the gas. The construction worker has struggled to find employment because of his activism. He promised his wife de ella before she died of an illness last February that he’d continue drawing attention to their only son de ella, Sigit Prasetyo, who was 18 when he died and is buried next to his mother de ella.

“In this ignoble country, there is no justice,” Asih said. “Indonesia has made me suffer so much.”

Sumarsih knows that pain too. She grew up the daughter of peasants in Central Java, about 260 miles from Jakarta. Though she did not attend university, her parents of her ensured she and her siblings of her studied and learned to read. Sumarsih started out as a teacher, then landed a job as a secretary in Indonesia’s parliament. Her husband worked for a private think tank and introduced her to Catholicism.

The pair had a son in 1978, Bernardinus Realino Norma Irmawan, better known to his friends and family as Wawan. Though he was studying economics, Wawan was deeply interested in politics and involved in the student rights movement. he wrote poems imagining a just and harmonious Indonesia.

On Nov. 13, 1998, he was preparing to join thousands of fellow students at Atma Jaya university to protest the selection of Vice President BJ Habibie as Suharto’s successor, a man they viewed as a crony of the former dictator. Sumarsih didn’t want her son to go, and that afternoon, soon after he had left, she received a call from a priest. Wawan had been shot.

She remembers the moments that followed in fragments. Praying the Rosary on the way to the hospital. A nurse telling her when she arrived that Wawan had already been moved to the morgue. His warm body of him lying in repose. A bullet hole the width of a cigarette butt in his chest of him.

Sumarsih believes Wawan was targeted because he tried to help a wounded protester. Witnesses said he volunteered as a paramedic at the protest, waving a white flag as he tried to reach the injured.

Wawan’s body was brought home for a vigil. Sumarsih prayed for his killer to be forgiven. Two weeks later, the Indonesian Red Cross Society came to the house offering government “grief compensation” of 5 million rupiah, the equivalent of $2,300 today. She refused the money and told them to give it to the soldier who shot Wawan — and if they couldn’t find him — the troops deployed at Atma Jaya university.

“I didn’t need the money,” she said. “I just wanted Wawan alive.”

Sumarsih’s forgiveness does not diminish her desire for justice. Without accountability, she said, Indonesia cannot progress.

Twenty-four years after her son’s death, Sumarsih says she’s motivated to protest each Thursday because it would make Wawan proud. She’s also encouraged by the growing number of young people who join her — many driven by new calls for gender equality and LGBTQ rights. The crowds are sometimes met by police intimidation. Demonstrators have occasionally been jailed.

Aksi Kamisan has spread to at least 21 of Indonesia’s 34 provinces. It also inspired a letter-writing campaign to the president addressing rights abuses still unfolding such as those in the eastern province of West Papuawhere native residents have been subjected to extrajudicial killings, arbitrary arrests and environmental exploitation.

“They exert a moral force,” said Vannessa Hearman, a historian of Southeast Asia at Curtin University in Australia who liked Aksi Kamisan to the Women in Black movement in Jerusalem and Argentina’s Grandmothers of Plaza de Mayo. “It’s very powerful.”

Sumarsih and several other victims’ families met with then-President Susilo Bambang Yudhoyono in 2008 and President Joko “Jokowi” Widodo in 2018. Nothing came of the meetings. In 2019, she saw Jokowi emerge from the palace in a motorcade. Sumarsih ran toward him wearing her signature black T-shirt imprinted with Wawan’s face and shouted, “Jokowi, don’t lie!” Sumarsih said the president turned to her and smirked.

But she will not stop her protest. And when she gets home, Sumarsih, who for years had lost the will to cook, starts dinner and sets an extra plate for her son de ella at the table.