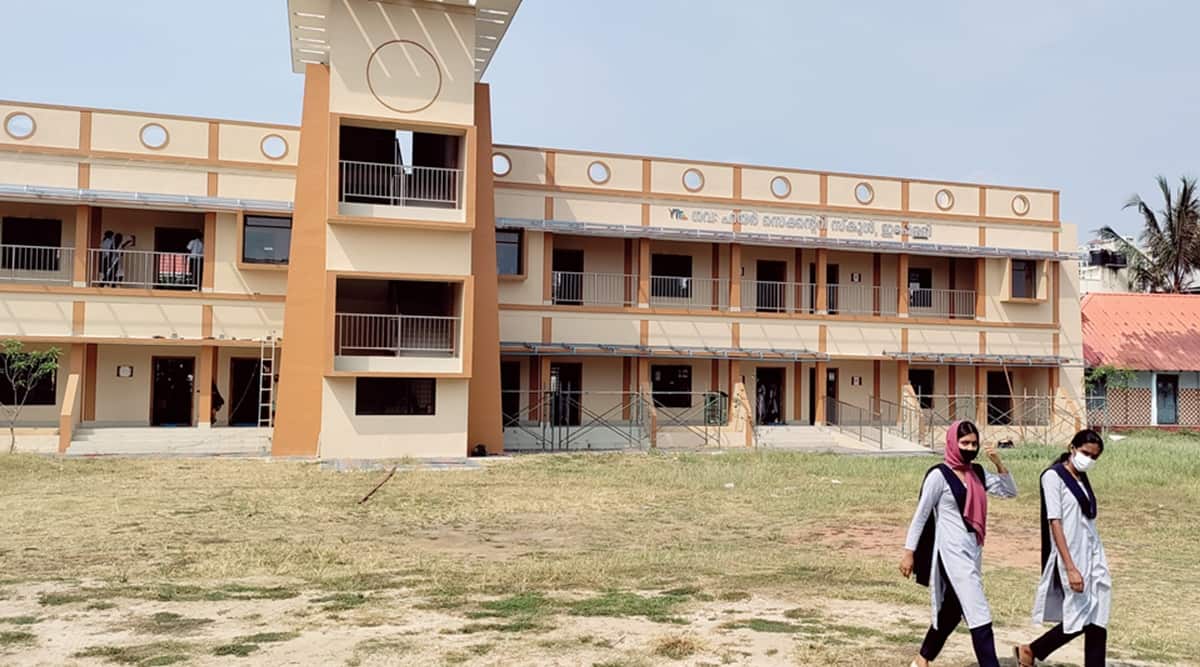 Last Tuesday, the course Dispute over the right to wear hijab by Muslim students in Karnataka it escalated when footage showed a Muslim girl, clad in a burqa, being interrupted by a large group of boys wearing saffron shawls at a university in Mandya. The video showed the girl standing up, shouting ‘Allahu Akbar’ while the children on the other side sang ‘Jai Shri Ram’. More than 400 km from that pre-university school in Mandya, Shybu KP, who teaches English to 11th and 12th graders at the Government Senior Secondary School (GHSS) in Edappally, Kerala, is a concerned man. He said he watched with anxiety as schools and universities in the neighboring state erupted in religious tensions.

“What is happening in Karnataka is reprehensible. By not allowing them to enter the schools, they (the Muslim students) are being subjected to many traumas. The issue (about hijab) should have been resolved through friendly discussions between parents, teachers and students,” Shybu said.

He recalled an incident at a school where he previously taught, where school officials nipped a similar incident about religious dress in the bud before it could turn into something big. “One day, a Muslim boy came to class wearing a skull cap. He was from an orphanage and quite stubborn in using it. Since it was the time of sabarimala annual pilgrimage, some Hindu children said they, too, wanted to come to class dressed in black in accordance with the 41-day vow they made. Immediately, we realized that this could become a big problem. We told both parties that the school was not a place to show your religious identity,” she said.

“Whatever freedoms our Constitution promises, they must be respected. That is the priority. At the same time, religious manifestations must not be allowed in our schools. It is dangerous. If something is being done deliberately (to provoke), it must stop,” Shybu added.

An example of this, he stressed, was the strict instruction of the Kerala government not to allow the display of any type of religious identity or symbol during the training of police cadet students. “But there was a part of the people who criticized him. School is where it all begins and where we respect each other and are tolerant of each other’s beliefs. (If such religious conflicts continue), we have to worry about what kind of citizens they will become.”

At GHSS Edappally, one of the largest public schools in the Ernakulam district of Kerala, there are no rules prohibiting any type of religious attire such as a hijab or burqa. Students in all grades wear a uniform established by the local parent-teacher association in accordance with the rules of the department of education. It helps teachers and school staff identify students and help students get bus fare concessions. A total of 720 students study in grades 11 and 12 of the school, of which around 150 belong to the Muslim community. More than half of them are girls.

Hana Fathima Ashraf, a 12th grader, said most Muslim girls at school wear a simple ‘thattam’ or ‘veil’ that covers their heads. Very few wear a hijab and even fewer wear a burqa to class. “There are even those who don’t even use a ‘thattam.’ It is their wish what they want to use. Every Muslim family may have their own customs and traditions,” she said.

Reacting to the events in Karnataka, Hana said, “I don’t think hijab should be banned. It’s connected to someone’s beliefs, why do you want to ban it? What is happening in Karnataka is wrong. Many of my friends here have shared posts on social media condemning him.”

Her batchmate, Afni Fathima, who wears a ‘thattam’ to classes, said she has never faced any problems with her friends or school officials over the outfit. “They understand our beliefs and customs,” she said.

Sankaranarayanan, director of the school’s upper secondary division, stressed that religious dress has never been a topic of discussion at PTA meetings, as beliefs and feelings are taken into account by everyone. “The ideal is that we do not impose anything on anyone. There may be feelings attached to someone’s religious identity. The idea is to be inclusive and welcome everyone. Isn’t that what India stands for? he said.

While the government has recommended wearing uniforms in schools, it has not made it expressly mandatory, Sankaranarayanan said. “The government understands that many people are going through financial difficulties right now and it is not right to impose anything on them. When we order from retailers, we ask them to apply discounts and give us extra uniforms for kids who can’t afford it. That’s how we do it,” he said.