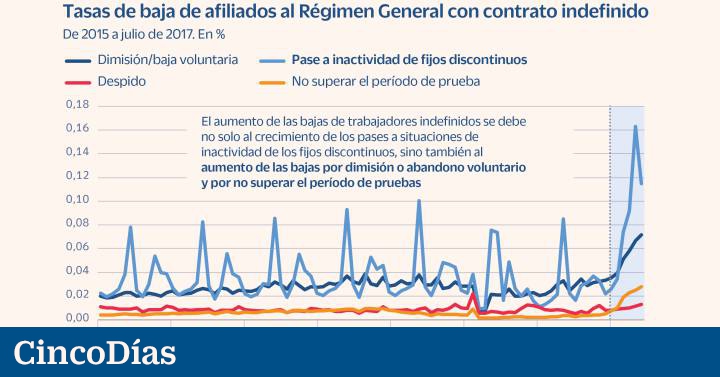 All labor reform goes through three stages: anticipation, in which employers make decisions about what might come before the new criteria are approved; one of the application, after the law has been approved; and stabilization period. This is explained by FEDIA researcher, Florentino Felgueroso, an expert in the workings of labor markets, who reported yesterday that the Spanish market will now begin the third phase of these phases in which the effects that are generated ideally are beginning to be analysed.

While all experts agree that it is too early to make a meaningful assessment of this labor law, a greater transparency effort will be needed on the part of the government to provide more data that will allow a more conclusive analysis, according to the Labor Market Observatory. The EY-Sagardoy Institute, detailed by Fedea and BBVA Research, yesterday presented the first and most complete balance of how the reform implemented in January is working.

This assessment indicates that nine months after the criterion is implemented – six months from its full entry – the effects of the correction are light and shadow, but above all, they leave some alerts to be aware of. One of them comes, right at the hand of the reactivation of the economy. According to this report, “recoveries in employment may already be reaching its peak – especially in favor of permanent contracts – without clearly surpassing pre-pandemic levels.”

The person in charge of economic analysis at BBVA Research, Rafael Domenech, acknowledged yesterday that the known membership data for the third quarter “predicts a definite slowdown in contributors that is in line with other indicators such as GDP”, which the organization said in July and expected between September fell by two-tenths compared to the previous quarter, while employment grew just one-tenth in the period. Thus, he expressed concern that this exhaustion comes when only the number of people employed has reached pre-pandemic levels but has neither worked effective hours nor have full-time equivalent jobs.

Another of these alarms paradoxically stems from reforms in unemployment. These experts point out that the 12.5% ​​drop in the unemployment rate in the second quarter (the lowest since 2008) is not exclusively due to improving employment, but also to the “sluggishness of the active population affected by the depressing” . development of participation rate”. This means that since fewer people are available to work, less job creation further cuts the unemployment rate.

Moreover, this is not the only downside of declining unemployment. As highlighted, unemployment fell particularly among those who had lost their jobs a short time ago, while the long-term unemployed continued to rise and are now nearly half of the total (48.6%).

These academics link this cut in unemployment to the vacancy rate (jobs that, according to employers, remain unfinished according to the Quarterly Labor Cost Survey). This rate would have increased again to about 140,000 in the second and third quarters. Both indicators reflect a more stressed labor market as there are more vacancies than the Spanish average over time and unemployment is also below that average over time, which means that work needs to be able to match to cover the growing vacancies. There are more difficulties. the wanted.

This tension in the market and, above all, this rising level of vacancies,” is worrying in an economy that has yet to recover activity and hours worked before the pandemic. These are imbalances that come before a full recovery,” Domenek warned yesterday.

The third alarm at this point will come, before that, however, from a very positive fact: the historical maximum of indefinite contracts—3.3 times higher than between January and August 2021—and an unprecedented decrease—39%—of labor reform. Temporary contract during the first eight months of application. This has made the new workforce permanent to 48% compared to the average of 9% they were in till now. In addition, the floating rate of workers’ stock fell four points to nearly 20% (and even lower in the private sector) in the second quarter.

However, the alarm goes off with the rise in affiliation rates of new permanent employees. That is, the termination of fixed contracts increases. The main reason is the “replacement effect” that is happening in old temporary contracts that are now becoming permanent discontinuous contracts (considered to be indeterminate but causes the association to withdraw in deactivation processes). Thus it can be said that these casualties contaminated All casualties of the indefinite contract.

Having said that, the authors of this work appealed for the need to conduct more detailed studies that actually show qualitative benefits, for example, to ascertain the annual income of these employees, the success of the discontinuous fixed; Or analysis of the actual duration of new simple indefinite contracts, something that will be looked at with a continuous sampling of working life (MCVL) over three or four years.