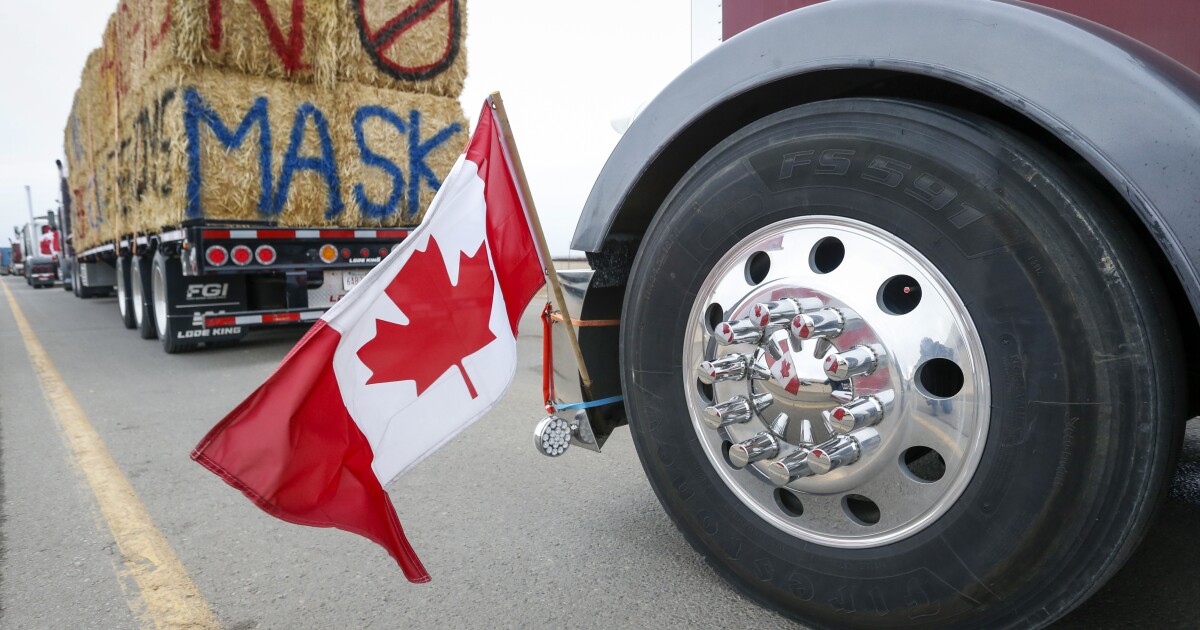 It began as a ragtag team of Canadian truckers shouting about their disdain for vaccine mandates and the politicians upholding them. They stood shoulder to shoulder in below-freezing temperatures, waving Canada’s flag and using their semis to block bridges and thoroughfares.

Now, nearly two weeks after the truckers began the blockades that shut down portions of Ottawa, the nation’s capital, the patchwork movement orchestrated largely on social media and in online chat groups is expanding globally.

As the Omicron surge recedes across the US and more states consider lifting mask mandates, similar caravans and blockades — dubbed “Freedom Convoys” — have started to pop up across the globe, threatening to bring city cores to a standstill in parts of the United States , France, New Zealand and Australia.

In the US, the loosely organized effort has bubbled on social media for days, with drivers communicating in Facebook groups and using a hashtag, #TruckersForFreedom2022, to discuss potential routes, including a convoy from California to Washington, DC

Using the Telegram messaging app, drivers have voiced their shared grievances — centered largely, they say, on governmental overreach — and discussed logistical details, such as having food, toiletries and other supplies delivered at various points along the route.

Some experts have warned that the convoys, which have garnered support from some Republican politicians and right-wing media, could become a harrowing echo of Jan. 6, 2021, when law enforcement proved woefully unprepared for the violent mob that stormed the US Capitol. Many cities, they said, could also grind to a halt with blockades.

Heightening concerns, some of the protesters have espoused far-right views and displayed swastikas and Confederate flags at rallies.

“An initial reluctance to enforce the law against these far-right protesters has the potential to lead to disaster,” said Mark Potok, a former senior fellow at the Southern Poverty Law Center. “In both Canada and the United States, these lawless convoys are engaging in tactics that are not only patently illegal but also have a very real potential to escalate into a direct challenge to democracy itself.”

Several law enforcement sources said a bulletin from the Department of Homeland Security warned hundreds of police agencies that a truck convoy might start in California and travel to Washington, causing traffic disruptions that could potentially target large cities.

And in recent days, Facebook removed a page promoting the US convoy, alleging that posters had repeatedly violated guidelines in promoting the far-right conspiracy theory QAnon. At the time it was shut down, it had nearly 140,000 supporters.

In interviews with supportive truckers in the US, many said they are not far-right radicals, but believe the government has grown too large and is prone to overreach.

“We’re tired of the mandates, we’re tired of giving up our rights as free people to do what we want,” said Daniel Koors, an Indiana trucker who plans to join the effort. “That’s what this entire convoy is all about: It’s to bring attention to the government that the American people are tired of being walked upon.”

Koors graduated from Purdue University, became a trucker 13 years ago, bought a truck seven years ago and now runs his own company, DWK Trucking.

He also runs the Disrespected Trucker, a Facebook group where truckers have been complaining about vaccine mandates and praising the Canadian convoy. He’s known to fellow truckers by his handle de el, “Short Stack,” an ironic nickname for a guy who’s 6 foot 6 and 300 pounds.

“That’s why we are truck drivers. We don’t follow the pattern of everybody else. We’re independent people. It’s a lifestyle that we live,” he said. “We’re not dummies. We’re blue-collar Americans. I own my company. That’s who we are and why we’re tired.”

Dena Wouters, an organizer for a local convoy group in Great Falls, Mont., is married to a trucker and said few know the trials truckers go through to provide for their families as well as the American people.

“Without truckers, our economy and supply chain would tank,” she said. “With the ‘one-size-fits-all, cookie-cutter approach’ with these COVID mandates, it does make it difficult and trying for truckers and businesses to do their jobs and provide for their families.”

The focus of the convoys, at least in Canada, has been to call for the removal of politicians, including Prime Minister Justin Trudeau. They won’t stop the blockades, protesters say, until he steps down and all vaccination mandates and COVID-19 restrictions are lifted.

In an address to Parliament this week, Trudeau urged protesters to leave Ottawa and Windsor, the Canadian sister city of Detroit, where they blockades closed the Ambassador Bridge, threatening serious disruptions to the auto industry supply chain.

“This pandemic has sucked for all Canadians,” Trudeau added. “But Canadians know the way to get through it is continuing to listen to science, continuing to read on each other.”

The prime minister contends that the protesters represent a small minority of Canadian truckers. Canada’s two largest trucking unions have denounced the convoys, and most Canadian truckers are vaccinated.

The efforts have, however, gotten encouragement from US Republicans.

“God bless these Canadian truck drivers. They’re defending Canada, America, and they’re standing up for freedom!” Republican Sen. Ted Cruz of Texas tweeted. “The government doesn’t have the right to force you to comply with their arbitrary mandates.”

In a statement, former President Trump called Trudeau a “far-left lunatic” who has “destroyed Canada with insane COVID mandates.”

In New Zealand, thousands of truckers gathered this week in Wellington, the nation’s capital, and stood outside their trucks waving the nation’s flag. They blocked roads outside Parliament and waved signs that read “Take Back Our Rights” and “No More Mandates.”

Like Trudeau, Prime Minister Jacinda Ardern characterized the group as a vocal minority.

“I think it would be wrong to, in any way, characterize what we’ve seen outside as a representation of the majority,” she said at a news conference.

“The majority of New Zealanders have done everything they can to keep one another safe.”

Since 2020, New Zealand has maintained some of the strictest travel restrictions and logged extremely low case rates — fewer than 19,000 to date — and a death tally of 53.

In Australia, hundreds of truckers recently joined a “Convoy to Canberra,” where protesters gathered outside Parliament to oppose vaccine mandates.

Early Thursday, dozens of protesters in southern France posted images on social media of a convoy headed for Paris. The main Facebook group behind the French movement has attracted more than 300,000 followers.

Back in the US, at a truck stop in the Northern California farm town of Dixon, a 25-mile drive west of Sacramento, many truck drivers seemed unaware of the convoy plans, and befuddled by what such an effort might accomplish.

“I don’t know. I’m thinking about diesel right now. Look at the price,” said driver Harjinder Singh, who was filling up his tank and gestured to the pump, where he was paying about $5 a gallon, a huge jump from a few years ago. As I have waited, 18-wheelers roared past on Interstate 80.

Singh, who lives near Sacramento and has been driving a truck for 32 years, said he was less concerned with vaccine mandates than he was with fuel prices, the cost of insurance and the rising cost of food.

“I’m worried about everything right now,” he said. “It’s scary.”

But Danny Schnautz, an executive at Houston-based Clark Freight Lines Inc., said he hopes to join the convoy.

“The idea behind it is bigger than a vaccine or COVID,” said Schnautz, 54. “It’s the frustration.”

He said truck drivers went from being the heroes of the pandemic to being subjected to mandates on top of a slew of other COVID-19-related restrictions.

“Truckers,” he said, “really have faced a lot of trouble trying to get their job done.”