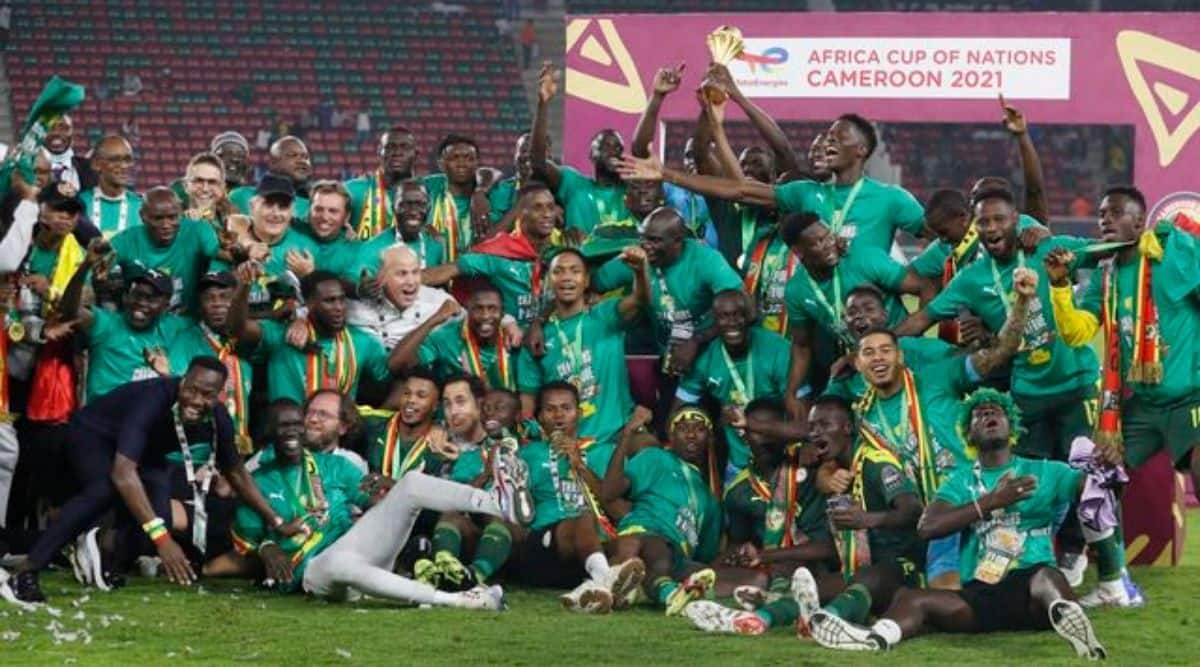 Sadio Mané finally delivered a first African Cup for Senegal, and his Liverpool team-mate Mohamed Salah could do nothing about it but stand and watch.

Mané drilled the decisive penalty in a shootout from the bottom left corner to beat Salah and Egypt in Sunday’s final in Cameroon and make up for a penalty miss earlier in the match.

See all the key moments of #SENEGY 👇 like #TeamSenegal African champions are crowned for the first time in history after a dramatic match against Egypt. 🦁 #TotalEnergiesAFCON2021 | #AFCON2021 | @football2together pic.twitter.com/A7aKozrtU8

Senegal won the penalty shootout 4-2 after it ended 0-0 after extra time. Salah, who was supposed to be the last penalty taker for his team, had no say in the shootout after two of his team-mates missed.

Senegal had lost two finals before, including against Algeria in the last African Cup of Nations in Egypt in 2019, when Mané was heartbroken.

This time Mané provided the winning moment. He ran off to cheer with his teammates, but also came back to spend some time comforting Salah, who was crying.

“We are proud,” said Senegalese goalkeeper Edouard Mendy, who was also crucial to the cause by saving a penalty in the shootout.

“We never won before. We worked very hard to win this trophy and today we won it as a group, as a country”. The final at Yaoundé’s Olembe stadium was billed as a battle between Liverpool strikers Mané and Salah, who were seeking their first major title for their country.

But it never reached the heights of a classic despite the presence of the two superstars.

That was even after the final began with drama when Senegal won a penalty within the first five minutes for Mohamed Abdelmonem’s foul on Saliou Ciss.

When it became clear that Mané was going to take her away, Salah approached goalkeeper Mohamed Abou Gabal to give him some advice while covering his mouth with his hand. That seemed to irritate Mané, who interrupted their conversation and pointed with his hand towards the right corner of the goal.

In the end, Mané took the penalty in the seventh minute down the middle and Abou Gabal blocked it.

Senegal continued in that line and squandered a number of other opportunities, with Abou Gabal starring in Egypt’s last line.

A night engraved in the memory of an entire nation. A story that will pass from generation to generation.

Salah fired two shots on goal in the first half, the second a powerful shot that went into the top corner before Mendy caught it with his hands. But Salah was sidelined from the second half of normal time when exhaustion clearly took its toll on Egypt, who were also without coach Carlos Queiroz on the touchline.

Queiroz received a red card in the semi-final and was sent off the touchline, spending the final watching from stadium seats, sometimes talking on the phone.

Egypt’s three knockout matches before the final also went to extra time, with two of them on penalties, and Egypt seemed to be playing for another shootout in a bid to win a record-extending eighth African title.

Egypt won those kicks in the round of 16 and semi-finals without missing, but missed with two penalties in Sunday’s shootout.

But Mohanad Lasheen made Mendy save Egypt’s fourth penalty, leaving Mané to win it and Salah to duck his head and start wiping away tears with his shirt. Salah has now lost two African Cup finals after Egypt failed to hold a 1-0 lead and lost 2-1 to Cameroon in 2017.

Mané had said before the tournament that he would give up everything he had won at the club level to lift an African Cup with Senegal. He was so eager to get his hands on the trophy that he had to be shooed away when the players were receiving their medals.

Mané had to wait for the captain of Senegal, Kalidou Koulibaly, to approach the VIP area to formally receive the trophy in the presence of the president of Cameroon, Paul Biya, the president of the African football confederation, Patrice Motsepe, and FIFA President Gianni Infantino.

Koulibaly walked slowly towards the field and his teammates with the trophy, savoring every second as Senegal finally shed the label of being the best team never to win an African Cup.

The result was also special for Senegalese coach Aliou Cissé, who was team captain and missed the decisive penalty in a shootout when Senegal lost the 2002 final against Cameroon. Cissé was also coach of the 2019 disappointment.

His players grabbed him at the end and threw him into the air. “Champion of Africa,” Cissé said.

“It’s been long. It’s been difficult. Sometimes complicated. But we never gave up.”