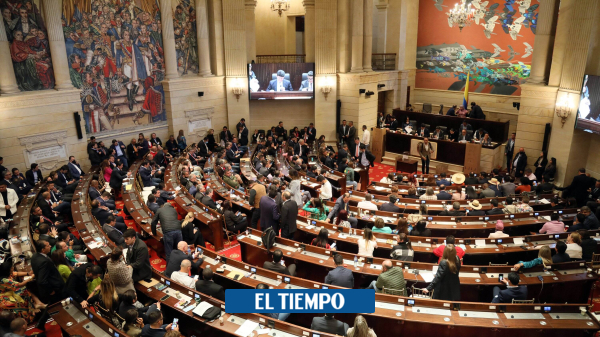 This was made known by the new survey carried out by the National Consulting Center (CNC) for CM&, in which they asked citizens about their perception of the compulsory nature of voting in Colombia.

(Grass: Gustavo Petro says that in ‘a matter of days’ negotiations with the Eln will begin)

Likewise, they consulted his opinion on the proposal that congressmen could be appointed ministers or run for mayor or governorship. In this regard, 76 percent of the population disagrees while only 20 percent agree. 2 percent do not know or do not respond.

Both issues are among the points that have generated the most controversy in the political reform that the National Government filed before Congress on September 13, and which was approved on Wednesday in the first debate in the First Commission of the Senate.

This initiative aims, according to the Executive, to put an end to electoral patronage, although it touches on some issues that have been sensitive in past similar initiatives, such as compulsory voting.

They had been waiting for the young man since 8:00 in the morning, however, he voted and left.

Although this reform still lacks several procedures in the CongressIn principle, it was accepted that all citizens should participate in the elections held in the country. However, this would only be for two consecutive constitutional terms.

“In order to strengthen the citizen culture of participation in the political and electoral decisions of the country, compulsory voting and the duty of the State to guarantee free public transport service for election day are created for two consecutive constitutional periods,” the project states. passed. But although it passed the first debate, there are divided opinions.

For example, for Senator Ariel Ávila, of the Alianza Verde, “this will encourage all citizens to go out and vote for the proposal they know best.”

While congressmen like Alejandro Vega consider that “we should not restrict the freedoms of citizens, that is why it is important to eliminate the provision of (compulsory voting), since this must be voluntary and optional.”

Compulsory voting has already been the subject of debate on several occasions in Congress and has not prospered. And this time it promises to be one of the strongest topics to debate when the initiative is in plenary session.

Among those who oppose this regulation is the senator of the Alianza Verde Angélica Lozano, who anticipated that she will vote in the negative. “An uncertain number abstains as a political position, another huge and uncertain number does not feel summoned or included in our political system. Their social and structural exclusion cannot be overcome by forcing them to vote,” Lozano asserted.

Other key issues approved in the reform is that the parties will only be able to register closed and blocked lists with a guarantee of universality, alternation and gender parity and diverse identities.

Precisely this Thursday from a forum in Medellín, the Minister of the Interior, Alfonso Prada, referred to the reform and to this point: “In our democracy, many feel excluded and that disagreement also generates conflicts. We seek to guarantee equal representation so that half of Congress, to name just one institution, are women.”

Among other issues, the duty to implement internal democratization mechanisms in the communities is established, failure to comply will result in sanctions for the party such as the loss of legal status.

Debate in the First Committee of the Senate on political reform

If a member of a public corporation stands for the next election, for a different party, he must resign from the seat at least six months before registration. And it is guaranteed that those who want to aspire to a position of popular election must have at least six months of militancy within the community.

Likewise, the members of the Collegiate Bodies of popular election, or those who have renounced their seat, are authorized only once to register in a party other than the one that endorsed them, without renouncing the seat or incurring double militancy.

The text of the political reform paper also stipulates the limit to re-election within popularly elected public corporations. No one may be elected for more than four consecutive terms in the Senate of the Republic, House of Representatives, Departmental Assembly, District or Municipal Council, or Local Administrative Board.

Technical sheet: Natural or legal person who carried it out: Centro Nacional de Consultoría SA Natural or legal person who entrusted it: CM& Funding source: CM& Universe under study: Women and men over 18 years of age, residents of Bogotá, Medellín, Cali, Barranquilla and Bucaramanga. Sampling design: Probabilistic and stratified. In each city, households were randomly selected from the sampling frame (telephone directory). An adult person within the household was surveyed Sample size: 300 cases Margin of error and level of confidence: Margin of error of 5.7% and 95% confidence Subjects referred to: Citizen perception regarding the mandatory nature of the I vote in Colombia. And opinion on the proposal that congressmen can be appointed as ministers, mayors or governors. Questions asked: 2 questions. Field work period: September 22, 2022. Collection technique: Telephone survey in households.